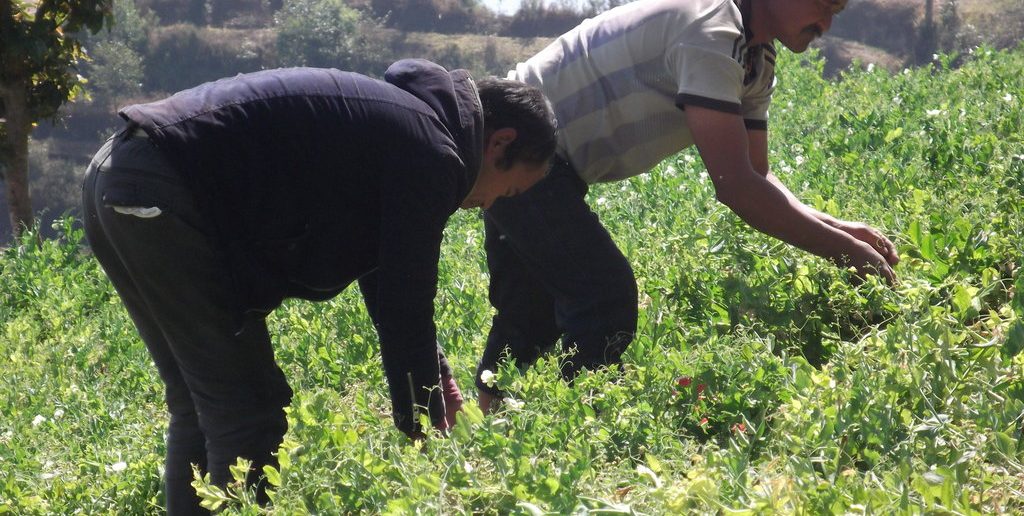 By Rose Taylor on June 14, 2016 0 Comments
Picking peas for the market

Sukhdev Tamang cannot read or write, but ask him about numbers and he can reel off profit, loss, net and gross figures like a seasoned accountant.

The 48 year old is among the hundreds of people who turned to Shree Mhendola Phole Cooperative, in the village of Okharpauwr, Nuwakot district, in north-west Nepal, after their homes and livelihoods were destroyed by last April’s earthquake.

Sukhdev, who lost his cows and his home, borrowed 700 Rupees at 1 per cent interest and bought 100 chicks at 70 Rupees each. He reared them for three months and sold them for 400 Rupees each.

“The feed for the birds cost me 200 rupees each and the inoculations were 12 rupees each,” said the father of two teenage sons. “I made a profit on each chick. Then I bought some more and sold them for a profit, too. Now I have 3,000 chicks.” 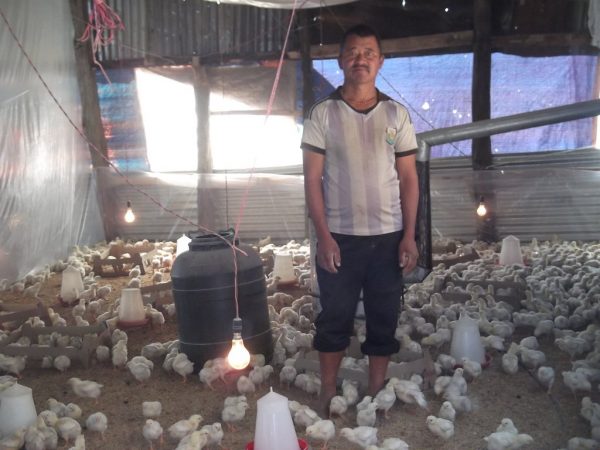 To maximise profits the enterprising farmer used some of his profit to grow peas on his small plot of land. He sold the crop in the market, made chicken feed with parts of the plant and used the rest as fertilizer on the land.

Shree Mhendola Phole Cooperative was set up two and a half years ago with £125 (20,000 rupees) from UK-based charity The Leprosy Mission England and Wales (TLMEW) to help people affected by the disease who had no other means of earning a living – because of the stigma they faced within their communities.

Since the earthquake membership of the cooperative has swelled from 80 to 349. And the bulk of the new comers are people who have no links with leprosy. The welcome influx is helping to break down centuries-old stigma associated with the disease.

“When families lost their homes and their livelihoods in the earthquake the cooperative stepped in to lend them small amounts of money to get back on their feet,” said National Director of TLMEW Peter Walker, who was in Nepal in February.

“As people in the community started to see that those who were affected by leprosy were getting help a few people who had stayed clear because of the stigma sought help from the cooperative. Then more and more began to join up.

“What was very noticeable was the total integration between people affected by leprosy and those who were not. They all had the same goal, to make the cooperative system work for them. It has done wonders for tackling the stigma.

“It seems adversity has brought people together.”

The cooperative is aimed at encouraging self-help groups and provides small loans to individuals or groups. To be eligible to borrow members must contribute 100 rupees (62 pence) per month for six months. They can then apply for a business loan to buy seedlings, plants, goats, chickens or buffalos – not for rebuilding their homes. Repayment terms vary: for chicks and vegetables it is three months, for goats and buffalos, it is 10 months as they take longer to yield returns.

Members can also save money with the cooperative and will get the same 1 per cent interest for the cash they deposit.

Shovakhar Kendal, country leader for The Leprosy Mission Nepal said: “People who join the cooperative get to see first-hand that there is no need for the stigma. Once someone starts taking medication they are no longer contagious. And as the people who are affected by leprosy become better off they get more confident. Both aspects have helped to break down barriers.”

The 7.8 magnitude earthquake and several aftershocks that struck Nepal at 11pm on 25 April killed nearly 9,000 people. Some 16,000 people were injured and more than a million homes were either destroyed or damaged.

In 2014, there were 213, 899 new cases of leprosy diagnosed globally according to World Health Organisation (WHO) statistics.

Leprosy is a chronic infectious disease caused by Mycobacterium leprae which affects the skin, peripheral nerves, upper respiratory tract and the eyes.

Since 1982 it has been curable with multidrug therapy – a combination of rifampicin, clofazimine and dapsone, taken for six to 12 months, and supplied free through the WHO.

Leprosy has been feared and misunderstood throughout history. It is often thought of as a hereditary disease, a curse or punishment from God. As a result people hide their symptoms for fear of being cast out of their homes by the communities. Late treatment results in deformities.

The disease is prevalent in places of extreme poverty where standards of sanitation and hygiene are also poor.