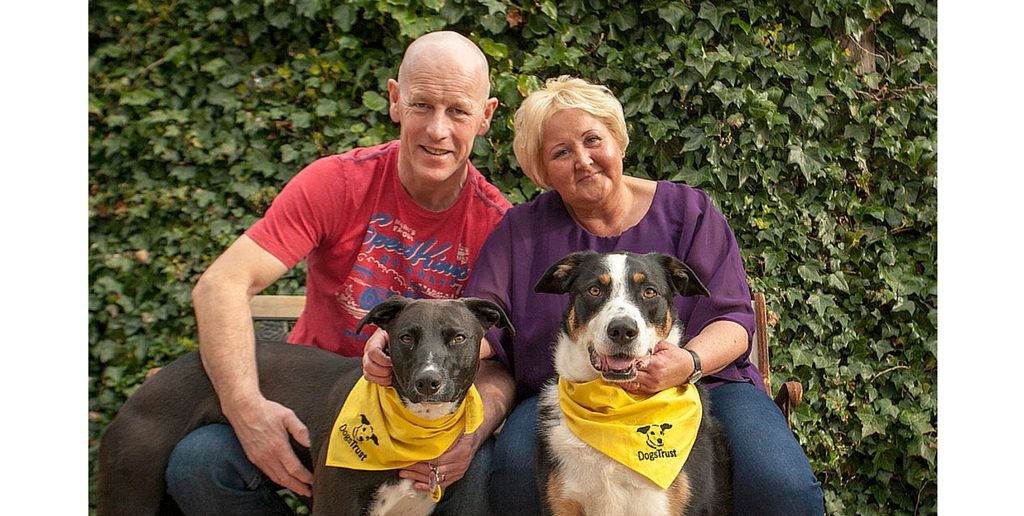 Mel and Claire are pictured with rescue dogs Nettie (left) and Oscar who will be lapping up the love on the special day. Photo: Ian Taylor of Crystal Clear Images
Amazing Animals

It mutts be love…

By Nisha Kotecha on June 20, 2016 0 Comments
Mel and Claire are pictured with rescue dogs Nettie (left) and Oscar who will be lapping up the love on the special day. Photo: Ian Taylor of Crystal Clear Images

Two former homeless hounds are to take centre stage as ring bearers when their owners renew their wedding vows this summer.

Lurcher Cross Nettie, who was dumped in a hedgerow at Dogs Trust Darlington when she was just eight weeks old, and Collie-Cross, Oscar, also from the Rehoming Centre, will accompany Mel and Claire Dixon down the aisle when they celebrate ten years of marriage later this month.

The couple, who adopted four-year-old Oscar in 2012 and Nettie, almost two, in July 2014, say they are hardly ever separated from their four-legged companions so the special day wouldn’t be the same without them.

“We couldn’t have it any other way,” says dog-lover Claire. “Oscar comes to work with me and Nettie accompanies Mel to his job so we are never separated!

“They are a huge part of our lives and make us laugh and smile every single day so without them there, it just wouldn’t be the same. They are both really sociable, despite their difficult starts in life, so we are sure they will enjoy it as much as we will.”

Oscar found himself homeless as a young pup when his owners discovered they were unable to take him with them when they were moving house, and poor Nettie was abandoned along with her three brothers, all of whom were dumped over the rehoming centre’s fence in a cat carrier.

The couple, who live in Donwell, will renew their vows on 24 June, their tenth wedding anniversary, at Springwell Methodist Church, Gateshead, where they got married, and the ceremony will be carried out by the Minister that married them, Kathy Reader.

Claire says: “We are really looking forward to it and it’s very special that it’s at the same church with the same Minister, who loves the dogs. When we got married, our dog Zoe was a ring bearer but she sadly passed away a few years ago so it’s fitting that Oscar and Nettie will walk us down the aisle this time. We accept they will probably steal the show but that’s fine by us!”