Relief for refugees during Ramadan in Samos

Ramadan, the Islamic holy month, is the ninth month of the Islamic calendar and is observed as a time of fasting and prayer by around a billion Muslims across the world. From dawn until dusk from the 6th of June until the 5th of July this year, Muslims are refraining from eating or drinking, in commemoration of the first revelation of the Qur’an to the Prophet Muhammad.

Yet for many Muslims, the month of Ramadan is a difficult time. For Muslim refugees who have been forced to flee their homes in Syria, Iraq and many other countries as a result of wars and violence, practising their faith while stranded in camps across Europe is no easy feat.

This is where the charity Calais Action is helping. Founded in August 2015, Calais Action has provided support and provisions for refugees living in slum conditions in Calais, Dunkirk, the Hungary-Croatia border and, recently, on the island of Samos in Greece.

In this most recent project, volunteers from across Europe have been finding ways to help residents in the refugee camps on the island of Samos during Ramadan. 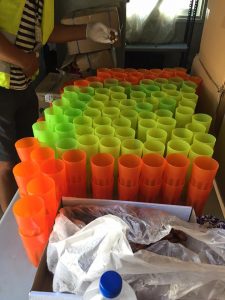 Handing out beakers and dates on Samos

As well as being a time of fasting, Ramadan is also a time for celebrating, spending time with friends and family and acknowledging tradition. Recognising the difficulties faced by many Muslim refugees who wish to take part in the normal, traditional practices of Ramadan, Calais Action stated on their Facebook page: “Things are far from ‘normal’, but we’re trying our best to improve the situation in the ways we can. We feel it is especially important to provide social activities, especially during Ramadan because after fasting, people want to eat, drink and socialise with their friends and family.”

And so, for the month of Ramadan, the charity has opened a night café on the island of Samos, to provide refugees with a space for informal social gatherings after nightfall, in order that they can relax and socialise after a day without food.

The night café service has so far been immensely popular. Every evening Calais Action estimates that they have handed out more than 800 cups of tea, coffee and juice to camp residents, stating that between its opening hours from 8:30pm to 10:30pm, the café has had a “party atmosphere”. As well as providing this night café service, the charity has also distributed plastic beakers to make it easier for camp residents to access drinking water, and has handed out dates, a traditional food to eat after a day of fasting. 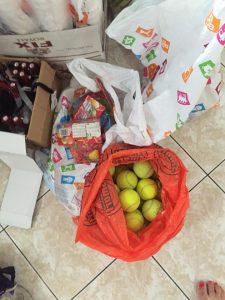 Toys and games for refugee children on Samos

For adults and children alike, the café has also hosted group activities, from skipping, to bubble blowing, to throwing tennis balls into buckets.

The aim of this project is to help camp residents to relax and enjoy the Islamic holy month, but also to help them to forget – at least for a short time – the difficult environment they are living in. This is particularly important given the current living conditions on the island of Samos, where recently a large fire broke out, leading to the destruction of much of the upper part of the camp. Charred remains of buildings and broken glass have still not been removed by authorities.

Through their work this Ramadan, Calais Action are helping many camp residents to recover from these traumatic events, and are providing the distraction and support that many people, especially children, so desperately need.

To find out more about Calais Action’s great work, visit their Facebook page.