Cielo, a popular social enterprise café and roaster with branches in the Leeds area (and one in West Bromwich), was set up to do two things; build better community cohesion and reduce loneliness.

The flagship coffee house is located in Garforth, a short train ride from Leeds city centre… 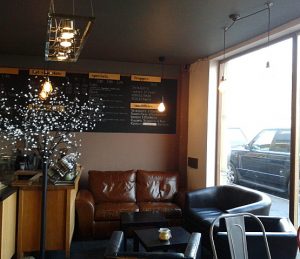 Established by Nick and Linda Castle, Cielo is a mainstay in Garforth. It provides a local hub for people to meet, and offers volunteering opportunities to help members of the community get back into employment, learn new skills or gain valuable work experience.

Since setting up in Garforth, Nick and Linda have opened further branches of Cielo, including one in Leeds city centre.

In June 2016, they launched a Crowd Funder campaign to raise funds for a second city centre branch.

Further Cielo branches can be found in Garforth library, Crossgates shopping centre (near Leeds) and a recent opening in West Bromwich (near Birmingham), which was launched in partnership with the local YMCA.

Cielo is known for the excellent coffee it serves. In addition to volunteers, there are professional baristas on staff to maintain the quality.

Linda roasts the beans on site in the main Garforth café. The micro-roaster is located in a glass-walled roastery within the actual café, so customers can see it in action on certain days. Linda works hard to source premium beans from Africa and South America. Bags of roasted beans can be bought in store and they’re happy to grind them for home brewing.

Customers can find all the usual coffee suspects on the menu (including filter), along with hot chocolate, a range of loose-leaf herbal teas and a selection of signature hot beverages (featuring various combinations of chocolate, cream and flavoured syrups!) .They cater for children and also offer cold drinks, such as smoothies.

Food-wise, they serve a wide selection of fresh cakes and tray bakes. For lunch, they offer sandwiches and paninis. They have recently launched a new range of snacks. 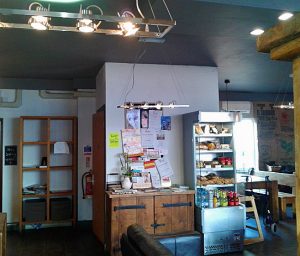 The flagship café is located at the heart of Garforth’s bustling main street.

To reach Garforth from Leeds city centre, the quickest option is to take a train, which takes less than ten minutes. From Garforth station, Cielo is about a ten minute walk. Alternatively, regular buses run through Garforth from the city centre and surrounding area.

The Leeds city centre branch is on Duncan Street, near the Corn Exchange. It’s about a five-minute walk from the bus station or ten minutes from the train station.

The planned new opening is in York Place, near Leeds train station. The Crowd Funder campaign is open until the end of July 2016.

Hannah Giles is a freelance writer specialising in the coffee industry. She has a particular interest in issues related to sustainability and ethics. Read more of her work at: http://extrashotblog.com/