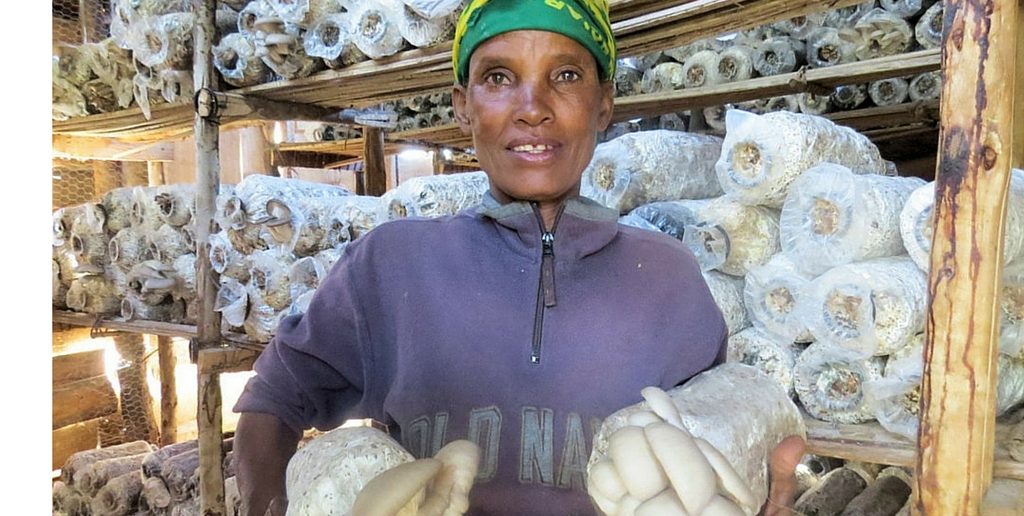 Magdalena Gwasuma ducks carefully into a small, dark cage at the back of her house, where rows of fresh oyster mushrooms sit on wooden shelves.

Gwasuma, who lives near Babati town on the edge of the Nou forest in Tanzania’s northern Manyara region, now realises she can make a living without cutting down the neighbouring trees.

Thousands of people living in the area have long depended on the forests around them to source wood for fuel or to make charcoal for a living, aid workers say.

Most are also poor farmers, like Gwasuma, who have been suffering from recurring drought and dismal harvests.

“The rains have become more unreliable, and this change in the weather has affected our agricultural production, as we have experienced low crop yields and shortages of water for livestock and domestic use,” she said.

Like many of her neighbours, Gwasuma has turned to growing oyster mushrooms to find new sources of income under a project run by Farm Africa, an international charity that works to reduce poverty in rural communities.

Tanzania has one of the highest rates of deforestation in sub-Saharan Africa, with around 372,000 hectares of forests destroyed every year, according to the U.N Food and Agriculture Organization’s 2015 Global Forest Resources Assessment.

Mature trees – which are vital to protecting soil from erosion, purifying air and water, and curbing climate change by sucking in carbon – are being chopped down as demand for wood increases, local experts say.

“When the forest is logged or burned, not only does carbon absorption stop but the carbon stored in trees and other vegetation is released into the atmosphere, increasing the amount of climate-changing gases,” said Lawrence Kileo, Farm Africa’s field officer. 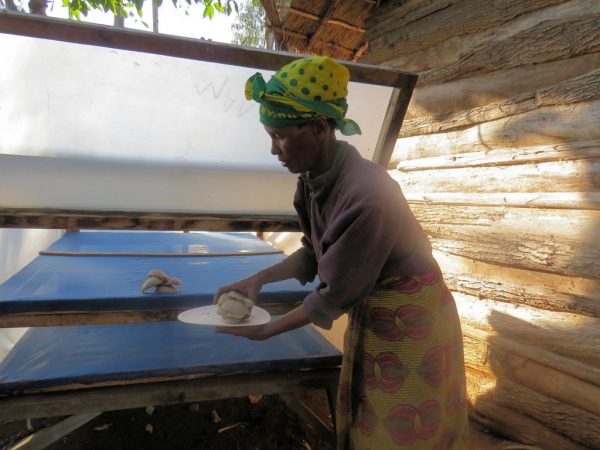 While mushrooms have traditionally been eaten in northern Tanzania, most farmers picked them from the wild and did not grow them commercially.

But Farm Africa is now teaching farmers to grow oyster mushrooms to reduce their reliance on growing crops and raising animals.

The project is part of wider government efforts to boost resilience to climate change by encouraging farmers to find other ways of earning money. Local families, who have for many years depended on the forest for their livelihoods, have been introduced to mushroom cultivation, raffia weaving and beekeeping.

With funding from the European Union, Farm Africa has trained 700 farmers in mushroom cultivation, and hopes the model could be replicated elsewhere in Tanzania.

Forest ecosystems lend themselves well to mushroom production, and experts work with farmers to select the best place to build their mushroom-growing facilities, which must be dark, warm and moist, Kileo said.

Farmers are also being trained in processing techniques so the mushrooms can be sold fresh or dried. The organisation has set up a processing and collection centre where farmers can come to sell their mushrooms, Kileo said.

Because the protein-rich fungi have a short production cycle, farmers can grow them throughout the year and generate a good profit, he added.

A kilo of mushrooms fetches around 6,000 Tanzanian shillings (around $3) in the local market, Gwasuma said.

Since Farm Africa began promoting oyster mushroom farming to communities around the Nou forest seven years ago, demand for mushrooms for domestic consumption has increased, it said.

Project coordinator Beatrice Muliahela said local people initially did not know how to cook mushrooms other than boiling them in stew.

“Many were also wary of eating them because they had been warned some mushrooms are poisonous,” she said. 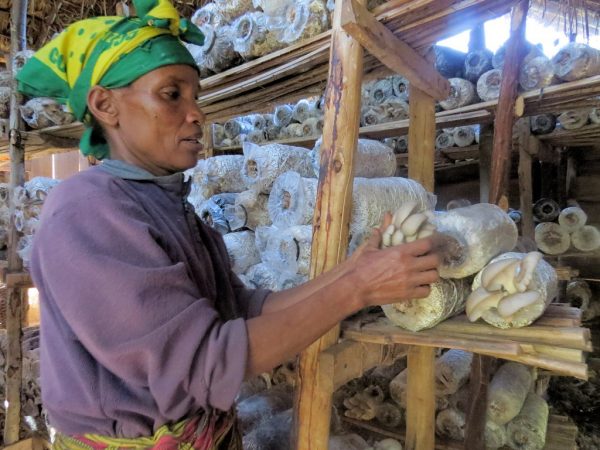 That paid off, and to meet growing demand, farmers are being trained to produce mushroom spores so they can expand production.

Mushroom farming has made a big difference to Gwasuma, her nine children and their families.

She makes 480,000 shillings ($240) from growing mushrooms each year, which is her biggest source of income. Before, her husband was the family’s main breadwinner.

“With the extra money, we have been able to send all our grandchildren to school, improve our diets and afford medical costs. We have also been able to improve our home and invest in our business,” she said.

Despite its success, the mushroom-growing push has not been without problems, Muliahela said. Developing the right spores that grow well in the local environment has been one challenge.

Another is access to markets, because farmers need to sell their fresh mushrooms close by to avoid spoiling them during transportation over longer distances.

“This is a problem because farmers have less access to markets and reduced bargaining power,” said Muliahela.

This article has been written by Kizito Makoye, Thomson Reuters Foundation.