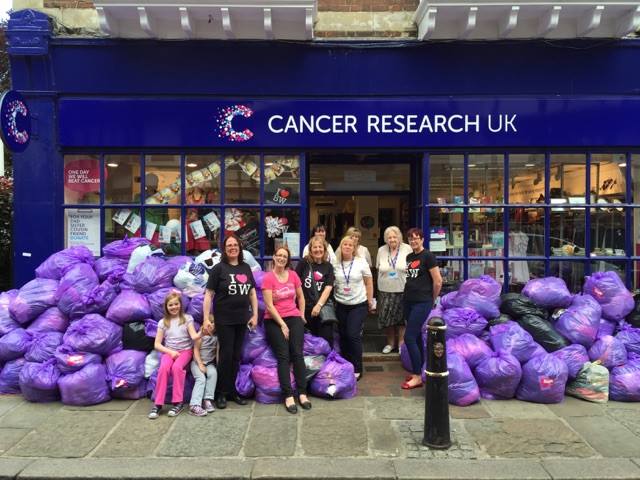 Some you lose, some you donate

To lose some extra pounds is a goal for many of us, but have you ever thought that it might benefit other people as well? Slimming World joined Cancer Research UK in a common charity project called ‘The Big Slimming World Clothes Throw‘in May where they encouraged their members to donate clothes that no longer fits them due to weight loss. Recently, this joint project announced its success. And it isn’t a small one!
The Slimming World members donated over 80, 000 bags of clothes and helped to raise 2.1 million pounds. This money is going to be used to further the research into breast cancer, one of the most dangerous and common types of cancer. Zoe Dean, Corporate Partnerships Manager at Cancer Research UK said, “the partnership raises vital funds for life-saving research, as well as helping to increase awareness of the link between obesity and cancer. The Big Slimming World Clothes Throw has once again been a huge success and we are very grateful for Slimming World’s continued support.“

Successful members of Slimming World programmes were encouraged to take bags of clothes that no longer fit them to local Cancer Research UK shops. By cleaning out their closets, the members could see their progress in the slimming programme while doing something good for others as well. Apart from clothes, members also donated shoes and accessories. Each bag collected is worth around £25 and since its launch in 2013, the campaign has helped to raise over £5million. 2016 has been the most successful yet, with a 113% increase in donations since 2014.

The link between the two organisations is not purely coincidental. Highlighting the link between weight loss and cancer, Slimming World spreads the message that “keeping a healthy weight could reduce the risk of developing ten different types of cancer,“ says Slimming World’s Marketing Co-ordinator Johanna Mather.