12 year old Hridoy lives with his family in a small village in Bangladesh. He had to stop going to school when his father was ill and took on the responsibility of providing for the family.

“We were happy with our family of four,” says Hridoy. “My father had a tea stall which was the only earning source of our family. But one day, he developed a cough and fever but he neglected the symptoms as usual.”

Montu, Hridoy’s father only visited a doctor at a Lepra health centre once his condition had worsened.

The doctors at the centre diagnosed Montu with TB, an illness that can be fatal. Montu began treatment but the course of medication made no difference as he had an even more complex form of TB than first thought. To cure Montu, he would need a more aggressive and prolonged period of treatment that would see him spend months in a hospital.

“Our real suffering started from that time,” says Hridoy. “The doctor told us that he needed to go to the hospital for treatment. Father would not agree as he knew we would starve if he stopped working. When he returned home, Lepra staff came to convince him but they failed. Then I assured him that I would take the responsibility and run my family.” 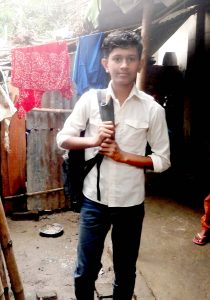 Hridoy had to give up his education and learn how to operate his father’s tea stall. This was the family’s only means of income and without it Hridoy, along with his mother and sister, would have been pushed further into poverty.

“Our happiness revolves around my father’s health. We starve as my father gets sick, but he takes me to school when he is well.”

Thankfully, Montu got better after a few months in hospital and was able to return home. Government health workers and Lepra staff monitored Montu to ensure his condition did not get worse again.

Finally, after eight months of treatment, Montu started returning to his normal state. Shortly after that, almost a year since the family’s ordeal began, Montu was able to resume work which meant Hridoy could go back to school.

The experience has had a long-lasting impact on Hridoy, who now keeps a look out for those with the same symptoms as his father and tells them where to go for help.

“When I have time, I help father in his shop. We are happy now. I counsel the customers to go to doctor if they have any symptoms of tuberculosis.”