Student inspired by Olympic torchbearer runs over 125km for Charity

After meeting half-marathon runner and CAFOD worker John McBride in 2012, who carried the Olympic Torch barefoot the same year, Luke felt compelled to sign up and run in races across the county to raise money for the communities who CAFOD support. Inspired by their vision, he has also volunteered for the charity in their York office, and cheered on other CAFOD runners at the Yorkshire Marathon.

Luke said: “I was first attracted to CAFOD by their mission of alleviating poverty and bringing hope to communities all around the world. Whilst volunteering for the charity in York, I met many inspirational people, such as John McBride who ran barefoot with the Olympic flame to raise awareness for those who could not afford shoes, and David and Carol Cross who showed great devotion to CAFOD.

“Making time for training is often difficult with my research and teaching commitments here in Oxford but the opportunity to contribute to CAFOD’s vital mission makes the effort well worth it. 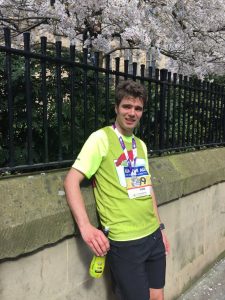 Luke after completing the Yorkshire Marathon

“My running season started with a difficult opener at Sheffield for the Yorkshire Half-Marathon back in April. The unforgivably steep hills that day were extremely demanding for someone used to flatland. Unfortunately, my next race didn’t prove any easier as a sweltering day in Leeds turned the half-marathon into more of a survival exercise than a pursuit of personal bests.

“Over the next few months I have 10k races in Hull, Leeds, Wetherby and Scarborough. My biggest challenge comes in October when I enter my 2nd marathon. So far, I have raised over £500 thanks, in large part, to the generosity of my fellow parishioners at Our Lady’s Church in York. I still have quite a few races to go and I am hoping to raise both awareness and funds for communities overseas.”

During the London 2012 Olympics, CAFOD ran events to inspire people to light the way and act as a symbol of hope. Now, as the Brazil Olympics take place CAFOD are urging its supporters to ‘speak up’ for the communities of Brazil.

CAFOD works with Brazilian partner organisations to help some of the poorest and most vulnerable groups. Together we are supporting indigenous people to improve their living conditions, defend their rights to land, health, education, and protect their cultural identities. Lobbying greater access to basic social welfare for vulnerable people and helping homeless families in São Paulo and landless families in the north and north-east of Brazil to have a secure place to live and to guarantee their livelihoods.

CAFOD representative in York, Carol Cross, said: “I want to say thank you to Luke for his dedication to fundraising for CAFOD over the years. Through his time, and commitment to helping the communities across the world, not only has he made a massive difference, but he has brought a community together.”

To find out more about CAFOD’s work, please visit: cafod.org.uk