Watch a Pregnant Trapped Hedgehog Get Rescued and Released

East Sussex Wildlife Rescue & Ambulance Service (WRAS) founder Trevor Weeks MBE was called out recently to a hedgehog with its head trapped under a fence on a footpath.

“The hedgehog was well wedged under the fence and I had to use a hammer as a lever to help raise the fence in order to free the hedgehog whose spines where making it difficult to free the prickly mammal” said Trevor. 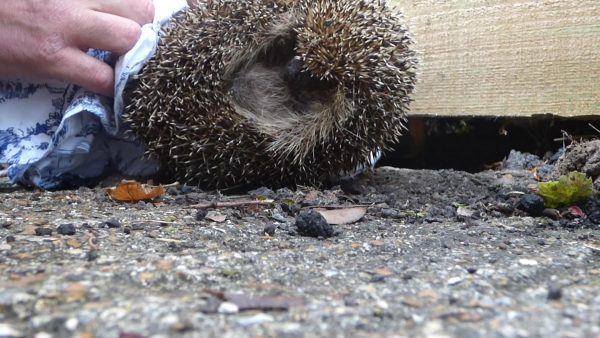 One examination Trevor noticed that the hedgehog had a rather rounded tummy so once back at WRAS’s Casualty Centre at Whitesmith an ultrasound was used to check to see if she was pregnant.

“The ultrasound showed that she could well be pregnant which our vet later confirmed, so after a check over we couldn’t find any signs of injury or illness so decided to bed her down for the day and release her in the evening” explained Trevor.

Rescuers were worried that she might give birth soon so the hedgehog was taken to WRAS’s special Hedgehog Maternity unit in Uckfield where she was kept in a quiet and calm environment till the evening where she was checked to see whether she had given birth.

“Luckily she had not given birth, so we took her back to Ringmer. As there was no easy access to the neighbouring gardens off the footpath where she had been trapped, we were concerned as to where she would go and whether she would know the location very well. The fence was new and may be blocking the normal route she takes” said Trevor.

Trevor’s partner Kathy placed her on the ground and stood back with Trevor to monitor her using a red light.

“It was not long before she was sniffing the air, and off she trotted along the pathway stopping occasionally to check her surroundings. She clearly knew where she was and was soon off and back to the wild. We hope she has a nest prepared for her young and that her access to the garden hasn’t been blocked by the new fencing” said Kathy Martyn.

Watch the rescue and release in the video below:

Fencing round gardens is known to have a big impact on hedgehog populations and their decrease which is falling by about 5% a year.  If hedgehog can’t move around and their territories shrink they struggle to survive, hunt for food and find partners.

WRAS is urging people to ensure CD size holes are left in fencing to allow hedgehogs to move around and thrive in our garden in Sussex.