Help for Heroes helps give a veteran his life back

Help for Heroes have introduced a fantastic new project, Heritage Heroes, in partnership with Canal & River Trust. It will involve up to 60 veterans in restoring forgotten canals, aiming to provide them all with an accredited qualification, and was all made possible by an incredible £500,000 donation from the People’s Postcode Lottery. Read on to find out how it changed the life of one veteran…

David Teague dreamed of seeing the world and learning a trade. So in 2005, at just 16 years old, he joined the Royal Engineers. He became a keen rugby player and skier, and signed up for several tours, them being the main motivation of him joining. He spent five years in Germany, completed two tours of Afghanistan and was also deployed to Jordan and Austria.

Sadly, David’s life was turned upside down. He was diagnosed with Post-Traumatic Stress Disorder following the tours he’d so wanted to go on. David began to suffer from crippling anxiety and saw himself turning from an active, outgoing person to the very opposite.

Lucky for David, he got to spend time at Tedworth House, a recovery centre set up by Help for Heroes and he has even become a member of Help for Heroes’ fellowship group, the Band of Brothers.

“That’s been really good for me – being around others and doing things that get my mind off all the bad things. It’s nice to know I’ve got those people and definitely reassuring that I’ve got the support there” – David.

David was also one of the 60 invited to become a part of Heritage Heroes, and has begun helping to restore canals across the country. His engineering past made it the perfect fit!

“For me personally, it’s [Heritage Heroes] the best thing because it gets me out of the house and back into a routine. It’s something to aim for and gets me mucking in again. It’s doing me the world of good being here. For any wounded thinking of getting involved, give it a go.” – David. 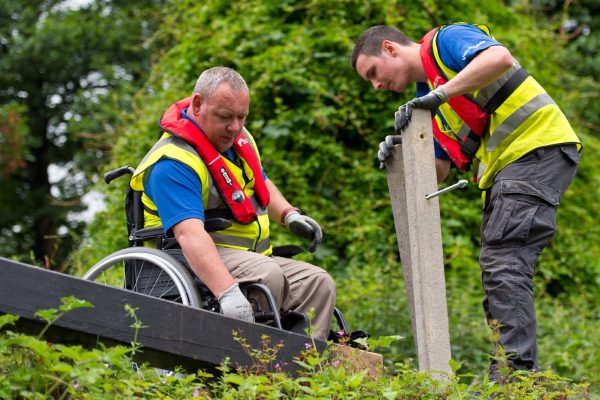 The work of Help for Heroes has helped David, and many others, an indescribable amount. Although his PTSD still proves a challenge every day, the Heritage Heroes project has meant that he’ll be able to get his life back. And that is what means the most for him.

For more information about Heritage Heroes, and Help for Heroes as a whole, please click here to visit their website.