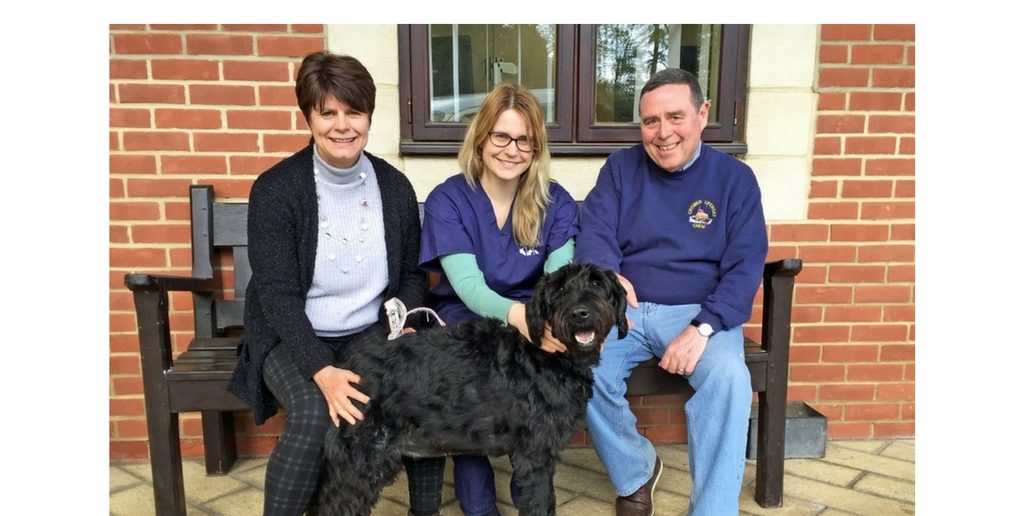 Roxy was four when she bounded into Erica and John Redmond’s life. Boisterous, fun and loving; she soon won her way into their hearts. However, earlier this year, at just seven years old, her sight started to deteriorate very quickly and her fun personality also started to fade away.

Out on a walk, she accidentally ploughed into her owner, John, at a full gallop. Roxy was also no longer the first to catch a ball when thrown. Her sight problems became much more life-threatening when she carelessly wondered off a low promenade wall. An immediate appointment with the vet was initially suggestive of an eye infection, but if she got any worse, it was advised Roxy should be referred to a veterinary ophthalmologist for further tests

The next day, Roxy narrowly missed walking into a tree. That night, she was bumping into furniture. Seriously concerned that her sight was worsening, Erica and John asked their vet to make an appointment at the Animal Health Trust (AHT).

“We were very confident this was the right way forward for Roxy. Renata Stavinohova, one of the ophthalmologists there, asked lots of questions; for instance: Had she eaten anything unusual? Does she drink a lot? Has she had any recent trauma? Has she ever been abroad? We answered as best we could, then Renata examined Roxy’s eyes and found severe inflammation and that both of Roxy’s retinas were detached. Renata confirmed our worst fears: Roxy was blind in both eyes,” Erica said.

Roxy was kept in for close monitoring and so that the AHT could start diagnostic tests straight away.  Most tests came back negative, therefore the conclusion was drawn that Roxy’s retinal lesions were most likely immune-mediated and she was started on a course of steroid tablets and eye drops to suppress the immune response that was attacking her retinas. In most cases like Roxy’s, no underlying cause is ever found. 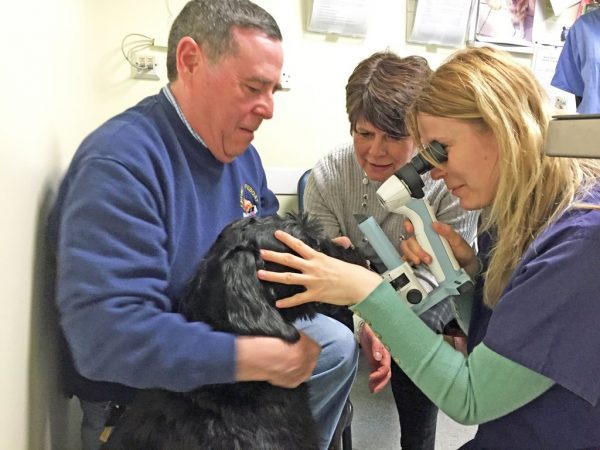 Soon Roxy was discharged to continue her medication at home. Determined to give Roxy as much care and support as they possibly could, Erica and John set about making some adjustments around the house. This included bubble wrapping furniture so Roxy couldn’t bump into it and using perfume to sign post doorways so she could more easily get around.  The medication caused muscle wasting so Roxy no longer had the strength to jump into the back of the car, but John made Roxy a ramp to overcome this.

Two weeks later, Roxy was back to the AHT to be re-examined. Although the inflammation had slightly improved, Roxy’s retinas were still detached and Roxy was still blind in both eyes. Renata and her supervisor, James Oliver, decided to alter Roxy’s medication and start her on a stronger immunosuppressant medication.

Erica said, “Within a few days we were convinced she could see a little. The clues couldn’t all be due to her other senses being heightened. Walking down the road, she saw a man approaching from 50 yards and barked at him! Another time we thought she ‘saw’ children walk across her vision about 100 yards away, her head moving as they did! We excitedly emailed Renata to tell her the good news, who was pleased, but wanted to see for herself!

“On her next appointment Renata couldn’t stop smiling with amazement! Roxy reacted to vision tests positively, not just the left eye, but the right eye too! Proof she could see again! Renata confirmed that Roxy’s retinas were reattached and she had regained some vision.”

Renata Stavinohova, ophthalmology resident at the AHT, said, “This is truly an interesting and amazing case and we are so pleased for Roxy, Erica and John.

“When I first saw Roxy she was, understandably, a quiet, subdued dog who was blind and frightened. The change in her now is quite remarkable! I have never seen this side of her before but it was quite obvious that the treatment has worked and Roxy is making fantastic progress.”

Erica and John are obviously thrilled by Roxy;s recovery, “Her strength has been returning. She no longer requires the ramp for the car and she has more energy. Somehow she is back to her dear self, and we couldn’t be more grateful to the staff at the Animal Health Trust for their care and attention throughout this worrying time.”