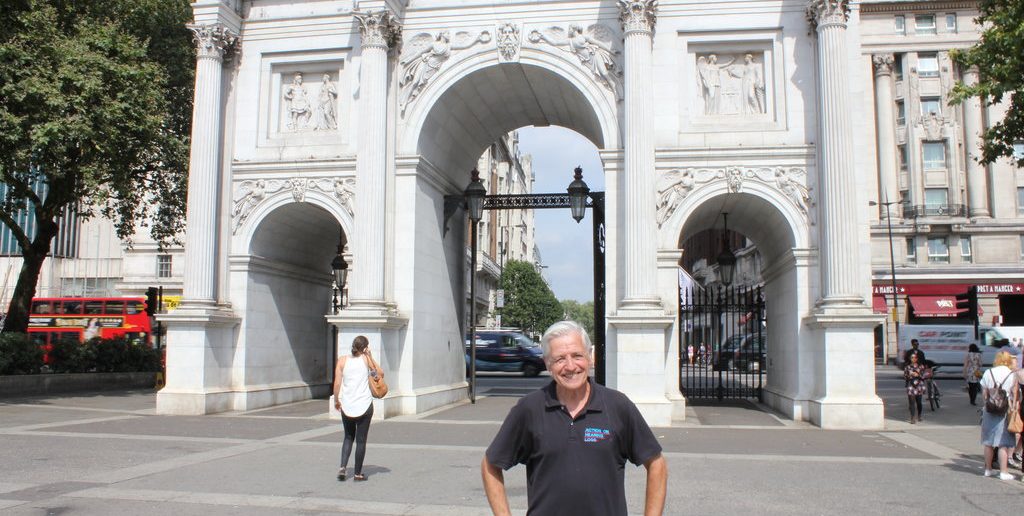 Walking from here to hear

It is most elderly people’s prerogative to have a moan about their lack of mobility, but not for Andy Griffin!

Few people can boast about having completed a walking tour that stretches the length of England, let alone a 72 year old with two hip replacements, severe hearing loss and angina. Andy Griffin could quite honestly be described as a super hero. 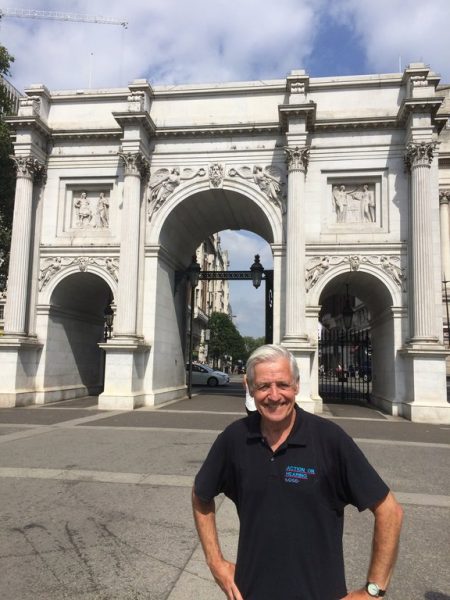 Andy at Marble Arch, where he finished his walk

His motivation for completing the “Jarrow march”, a 298 mile walk from Jarrow in Northumberland to Marble Arch in London, was to raise awareness for the one in six people in the UK who suffer from the loss of their hearing. In doing this he also brought the work of the charity Action on Hearing Loss into the lime light, uncovering the support they provide to Andy’s fellow sufferers, through care, researching and developing treatments and campaigning for equality. By embarking on this journey, he became a figurehead for the cause.

Far from relating the struggles involved with such a feat, Andy was more keen to highlight the beauty of his surroundings as he travelled throughout the country, walking through cities such as Durham, Darlington and Sheffield: “The highlight was probably walking in sunshine at 6am when very few were about, walking 10 miles before most people had surfaced from their beds.” It took him just 16 days to reach his destination in London, travelling between the 1st and 16th August, where he was greeted by a welcoming crowd of family, friends and supporters.

The 72 year old averaged around 22 miles a day: “I did six hours a day on my feet and although I had blisters on my blisters, it was no real hardship.”

The emphasis that Andy places on his sheer determination and basic ability to quite simply “just walk”, rather than his disadvantages in health and age, is an inspiration to not just the elderly, but the younger generations too. This old fashioned “get up and go” attitude and determination, many would agree, could be a lesson to a lot of lazy teenagers!

This impressive feat isn’t the only work Andy has done for Action on Hearing Loss: through his role as a volunteer for over five years, he runs two support groups in Alnwick and Morpeth as well as delivering speeches within his local community, making the most of his retirement from primary school teaching. Anne Shilton, Community Support Officer at Action on Hearing Loss outlines the impact of his wonderful work: “He is a true inspiration to us all who gives so much time to his local
community, whether it is through his fantastic volunteering raising awareness of hearing loss or writing plays and books on local history to educate generations.”

These types of charity work appear more fitting for a man of his age; many would question where he got the idea to walk 298 miles in the first place! The Jarrow March has its roots in the place that Andy grew up – Shilbottle, near Alnwick. Also known as the “Jarrow Crusade”, this protest march was attended by Northumberland’s working classes in 1936, who were despairing at the unemployment and poverty of the Tyneside town of Jarrow during this period. The spirit of these protesters was what inspired Andy’s own march, he himself marching as another plea for recognition – this time for the predicament of the UK’s hard of hearing.

Regardless of his age or cause, Andy is a true inspiration to us all: “…I felt the spirit of the march was in the air. I have been asked ‘Why are you doing this walk at your age?’ My response was ‘Because I can.’ Rather than dwell on failings – like hearing loss – let us celebrate what we can do.”

I am a BA English student at University College London. Having been involved in social campaigns at university, I am only just beginning to get interested and involved in the work of charities, so working with Good News Shared is a fantastic start!