It hasn’t been long since Uber emerged and became an urban phenomenon. Many of us cannot imagine our daily lives without this app. But what about an app which does not help people commute but delivers food to homeless people instead?

It actually exists, and it is called Unsung!

Many of us struggle to consume absolutely all the food we buy and feel uncomfortable throwing away what is left. Especially, when there are so many homeless and hungry people outside, who would be grateful to have what we do not want anymore. If only there was an efficient way to get the food you no longer want to them quickly.

It is now possible in Texas.

“Most people don’t think about food. It’s just something that is always around. So it can be hard to wrap your head around the fact that 49 million people in the United States live in hunger,“ explains Unsung about the reasons why a group of guys decided to bring the Unsung App to life. By making the donation of food easier, they hope to help tackle the pressing issue of food insecurity and hunger in the US. 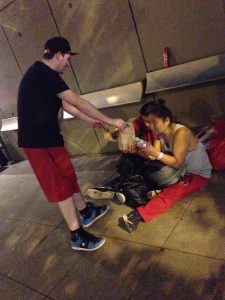 Unsung works on the idea of “sharing economy“, just like the hugely successful business of Uber or accommodation provider Airbnb. Sharing economy is a “new socio-economic model of sharing under-utilized services and resourced between people who desire them“, as it matches an instant demand and supply.

People can easily download the app to their smart phones and start helping.

Upload a photo of any unwanted food or groceries onto the Unsung app and the application automatically identifies your location. An Unsung driver, who collects and delivers the food, work as volunteers.

They pick the food up and drop it a local food bank or homeless shelter. Drivers also sometimes deliver food directly to homeless people they spot on the street. Both ways, the food gets to those who need it the most.

Moreover, any food that one donates appears in their LiveFeed and this can benefit those who decide to help. Others can check out their actions and tip them directly with bitcoins. Unsung also knows how to work out the cost of the individual food donation and enables the donors to claim a tax reduction due to their charitable deeds.

Unsung also believes that this open and visible history of donations will prompt people to “compete against each other for who can do the most“, which is a healthy competition and benefits everyone.

This app is now only available in Texas but hopes to expand across the US later this year.