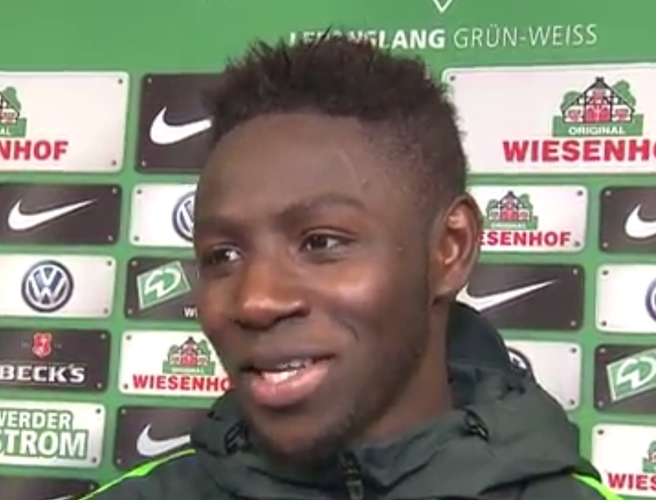 October 15th 2016, Bremen, Germany. Werder Bremen are playing Bayer Leverkusen in the top tier of German football. The score is 1-1 in the 57th minute, Bremen have a free kick on the flank, 35 yards from goal. The ball is whipped in but deflected, the ball falls to Manneh in the 18 yard box. Manneh slots it into the keeper’s right hand corner and the home crowd erupts in celebration. It was his first goal in the Bundesliga, and a very unlikely one considering where Ousman Manneh was only two years ago.

Aged just 17, Ousman Manneh was left with a heart-breaking dilemma: stay in almost certain poverty in Gambia, or pursue a dream of a new life in Europe, one away from poverty and corruption. The choice is not easy however; the journey to Europe is perilous and full of hardship. The trip would be dangerous and there is no guarantee of finding a place to call home in a Europe that is divided over the issue of refugees.

The route would take the young man, as well as thousands of others just like him, across some of the harshest terrain and most dangerous lands. The journey goes through the Western Sahara, then onto Senegal before arriving on the coast of Libya. The journey over the Mediterranean that many refugees are forced to take is also highly dangerous with many refugees dying from being on overcrowded boats organised by illegal people smugglers. In the space of just two months, from June 2014 to August 2014, it was estimated that over 2200 people died while attempting to illegally cross the sea to Europe.

Ousman Maneh was one of the lucky refugees who made it safely to Europe, where he could eventually make his way to the relative sanctuary of Germany. Manneh found himself, along with many hundreds of others, in a refugee camp called Lesum in Bremen. These camps help migrants relocate to hopefully permanent homes all around Europe, but Ousman Manneh decided that he would like to stay in Bremen, a city in which he would be so loved and revered in just two years. Now in Germany, Ousman wasted no time in pursuing his love for “the beautiful game”, playing for the local under 18 side. Ousman didn’t stay there for long however, as the young striker quickly earned himself a reputation as a prolific goal scorer from his time in the Under 18 side. He scored an amazing 15 goals in just 11 games, and scouts were sent from across Germany to view the bright talent. Mennah had offers from some of the best clubs in Germany: Schalke, Hamburg, St Pauli and Wolfsburg. He decided to stay in the city in which he initially found sanctuary, and played for the home town Bundesliga team of Werder Bremen.

Manneh spent a year in Werder Bremen reserves before he managed to earn his place in the team’s starting eleven for the very first time in August. In his first post-match interview after his winning goal in Bremen’s 2-1 victory over Leverkusen, Ousman was very much still in a state of shock about what had just happened. He said “I can’t believe this, is this real or am I dreaming”. Many would think that this sort of meteoric rise to the top could only be fiction, but not in this case. At just 19, Manneh is the first ever Gambia player to play more than four games in Germany’s top tier of football, and the first ever Gambian to score a goal in the Bundesliga.

After coming to Germany as a refugee in 2014, Ousman Manneh is now the first Gambian to score in the #Bundesliga! Congratulations! 🎉 #SVWB04 pic.twitter.com/m7NxY1Bl7q

I’m sure Ousman could have never imagined when he first set off on his long gruelling journey across Africa and Europe that in only two years he would be playing with some of the biggest footballing starlets in the world. With his rise to prominence, not many would back against his continued footballing success and he himself being one of Europe’s top players in the future. Remember the name –  Ousman Manneh.