Ron and Wendy Bibby love to travel so much they moved from Devon to Sussex so they could be closer to the main London airports. They have been all over the world on exciting holidays, including to India, China and the USA, and the couple would spend up to four months a year in France as one of their sons had a property there.

In 2010 Ron was diagnosed with vascular dementia. This, plus a diagnosis of prostate cancer around the same time, hit the couple hard. “We were in shock about both diagnosis and went through a lot of different emotions. I started to imagine the worst, especially with the dementia as I had seen others in late stages. Ron took it hard and was very low for a long time,” Wendy recalls.

The couple were luckily to still be able to continue going on exciting holidays abroad until 2015. “By the time Ron was diagnosed we had sons in Singapore and Australia so our holidays became visiting them, which made it much easier. Initially travel was fine apart from the large amounts of medication we had to carry. As Ron has declined we have been unable to go abroad. Our last trip was early 2015,” Wendy explains.

When the couple realised they were not going to be able to go on holiday on their own anymore they turned to the Internet for help. “I looked online for group holidays for people in similar situations to us and found Dementia Adventure,” says Wendy.

Dementia Adventure is an award winning social enterprise committed to helping people living with dementia get outdoors, connect with nature, themselves and their community, and retain a sense of adventure in their lives.

As they had never been on a ‘supported holiday’ before, Ron and Wendy were unsure whether it was something they would enjoy. “The information on the website and the quotes from people who had been on the holidays certainly made it seem like it could work well, but to be honest I did feel apprehensive. I really had no idea what to expect,” says Wendy.

The couple gave it a go and have now been on several supported holidays. “The support wasn’t in anyway intrusive, we felt free to do what we wanted, but we knew we had the support there if we needed it. The support gave us confidence to do things we might not have done, like Ron going on the zip-wire! We were able to have quality time together.

“It was great to be able to trust the team and take some time for myself. For example, when we were at Osborne House, on the Isle of Wight, Ron was telling one of the volunteers about the gold leaf gilding, as he used to do that himself, it was so lovely for him to be able to talk about it, and as he was enjoying himself I was able to leave him to it.

“Another time on a holiday in Northumberland Ron wandered off and immediately the team went to find him which meant I didn’t need to panic, that was invaluable support.

“Ron loves to chat, he uplifts others and loves to be with people, so being with the group was fantastic. We got to share our experiences with them and learn from them – we supported one another. There was lots of laughter and a few tears.” 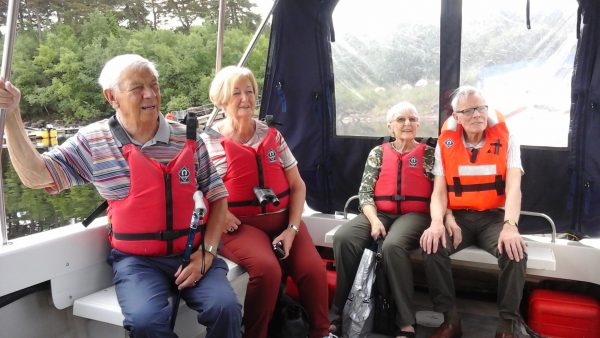 Ron and Wendy on a Dementia Adventure holiday

Studies have shown that taking regular holidays can have health benefits such as a reduced risk of cardiovascular disease, heart attacks and premature coronary death. Other studies have found people report having increased energy, increased feelings of life satisfaction and fewer general health complaints after going on holiday.

Ron and Wendy have found these findings to be the case for them. “After any holiday we both have a greater sense of well-being, so it’s great we haven’t had to stop. When we’re back at home we talk about the memories of the holidays which is great stimulation for Ron. Being outside is so uplifting – you just feel a sense of freedom,” says Wendy. 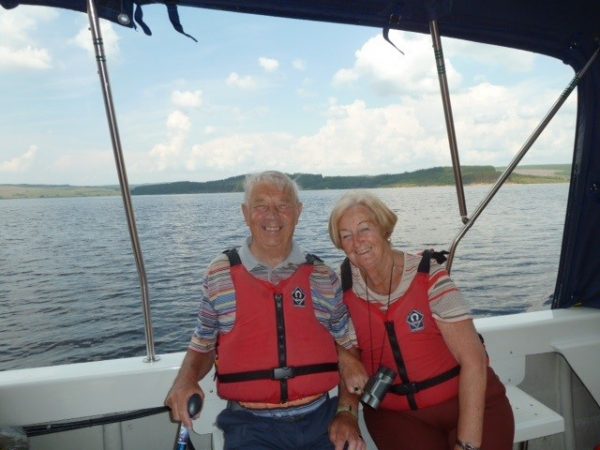 The couple are now big advocates of supported holidays. “Being with the other couples and the team is invaluable, we help each other, sharing and supporting. We felt really understood by the team who were very patient and enthusiastic and went out of their way to ensure we had the best time possible.

“Sometimes you have to step out of your comfort zone – face the fear and do it anyway, I say!  I’d go on a supported holiday every couple of months if we could.”

When asked if they have any advice or tips they would like to pass on to other families living with dementia, Wendy says, “Remember life is not over, just different. Like any new role, it will take some adjustment and there will be difficult times but life can still be good. Get family actively involved so they can see what you’re living with day to day. Be open with everyone and don’t hide away. Don’t be ashamed. Don’t be frightened of the medical profession – arm yourself with good information and be bold. Talk with people about how you feel, you will feel a lot of different emotions, all of which are normal.

“Include the person living with dementia in conversations, speak in front of them. This stops them feeling excluded and useless.

“Accept you cannot change the situation and take each day as it comes and try something new – you might surprise yourself!”