German shepherd Finn, a beloved police dog was stabbed whilst chasing a suspected thief in the area of Stevenage on 5 October. Finn’s handler, PC Dave Wardell, was also injured. Alex Goodwin, a nine year-old boy from Leicestershire, was mortified when he heard about the attack so became in contact with Finn and PC Wardell through social media. Alex decided to draw a Christmas card based on Finn, which then sold out within a day.

Alex is currently undergoing chemotherapy for Ewing Sarcoma, a bone cancer that affects less than 30 children in the UK each year. He faces an extremely complex surgery at Christmas. He saw the news about Finn’s injury and followed the story. Shortly after a petition was started to change the law regarding attacks on police dogs and horses. The “Finn’s Law” group suggested that one of Alex’s drawings of Finn could be made into a Christmas card to help raise funds for his future treatment and rehabilitation. 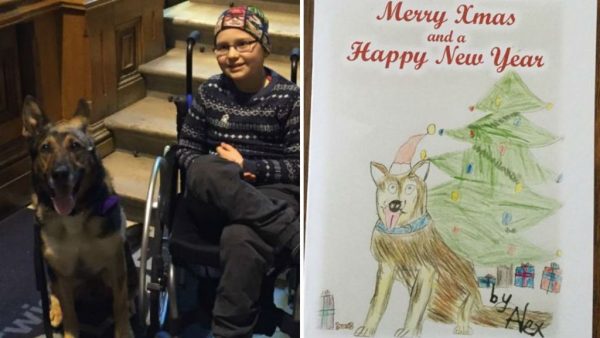 Alex Goodwin did a selfless act that could change his life, but anyone can help a stranger in need by buying a Christmas card. As the Christmas season is approaching, everyone will be stocking up on their cards; it is time to think of those less fortunate and perhaps spend a little extra to help charities raise some money. However it is always important to know where your money is going and how much of it goes to charity.

Most large stores will sell charity Christmas Cards: Debenhams, John Lewis and Marks and Spencer’s are all examples. John Lewis donates 10% of the profit made to an unspecified charity and Debenhams donate an unspecified amount to charities such as the ‘Make a wish Foundation’ and ‘Children in Need’. M&S sell a variety of five packs of charity Christmas cards, of which 20% of the profit goes to charity. The 20% is then divided and donated across four different charities: Macmillan Cancer Support, Breast Cancer Now, UNICEF and Marie Keating Foundation.

There are many organisations online that have the sole aim of selling charity Christmas cards once a year, one of these is Chariychristmascards.com. This company has raised 10 million pounds over the last 30 years for 250 different charities. Some of these charities include: British Heart Foundation, Cancer Research, NSPCC, Marie Curie and Help the Heroes. When you buy a card online from this organisation, unless you choose specifically for them to take 50p directly out of the cost of producing the card to be donated to charity, they only donate 10p per purchase.

Some charities will sell Christmas cards on their websites or if they have shop branches across the country they will keep stock there to sell. Due to their fundraising from the year, or large donations from big companies, or if they are a large well known charity, they will be able to manufacture the cards for either a minimal price or for free of charge, meaning more of the profits are able to go towards the cause.

An example of a charity that put 100% of their profits back into the charity is BRACE, an independent charity committed to defeating dementia through scientific research.

Many charities sell charity cards on their own websites for example: The National Autistic Society, Cancer Research UK and Macmillan. Charities like Oxfam that have shops around the country and websites sell more than just Christmas cards, they also sell Christmas decorations for around the house, New Years calendars and Christmas gifts. 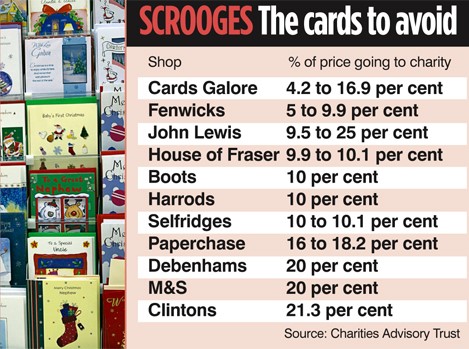 Even though when donating to charity every little penny helps, it is always important to know the percentage of how much you are donating, the charity will actually see.