Cat found in engine is back helping young diabetic owner

A cat rescued from a van engine has been reunited with his owners who lived 60-miles away – thanks to the power of Facebook.

The terrified ginger tom cat was discovered wedged behind the heater in a broken down van in Reading, and was coaxed to safety by passing animal lover Darren Sumner.

Miraculously the cat, dubbed Sparky, survived his ordeal unhurt and given to the RSPCA for care. But with no microchip it was uncertain if he’d ever be reunited with his owners. 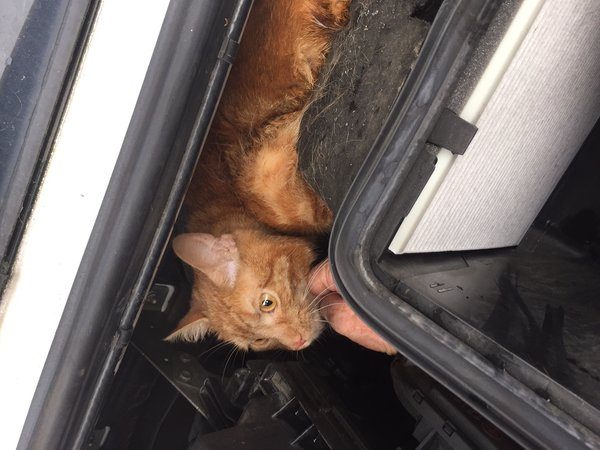 Thanks to photos of the van taken by another passer-by, the RSPCA managed to pinpoint exactly where it started its journey – 60 miles away in Tottenham, north London.

RSPCA officers put up posters in Reading and around Tottenham and Sparky’s story went viral on social media. His stunned owners spotted a press story about his amazing journey on a local Facebook page.

They revealed they had an extra special reason for wanting their cat, who is actually called Simba, back home.

Gemma Davis, a mum-of-two, said: “My daughter Imogen has type one diabetes and Simba seems to know when her blood sugar levels are dropping at night.

“He vanishes and I find him curled up on Imogen’s bed and when I check her blood sugar levels she’s low. The first three or four times it happened I thought it was a co-incidence but it’s happened about a dozen times now so I think he definitely senses something is going on. It’s so nice to know there’s someone else looking out for her, especially at night time.” 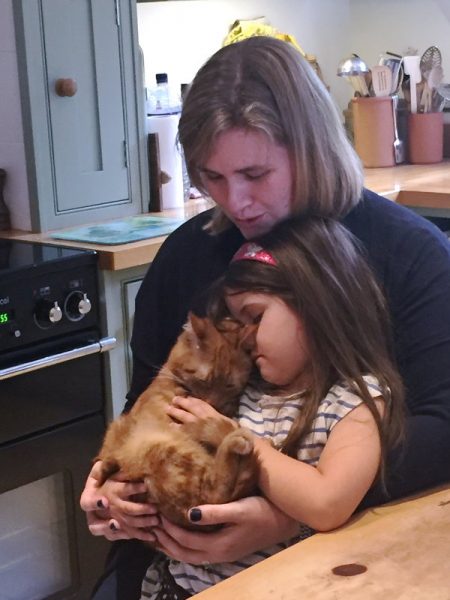 Gemma, who lives with her husband Paul, their five-year-old daughter and 21-month-old son, in Tottenham, feared Simba had been run over when he didn’t come home and neighbours said they hadn’t seen him.

She said: “I told Imogen he was having an adventure somewhere but as the days went by I stopped telling her he was coming back.

“We had almost given up hope of seeing him again when my husband spotted him on Facebook – we couldn’t believe it. It was such a relief to know he had survived such an amazing journey in a van engine and was safe and well.”

The family were reunited with Simba after he had been given a health check at the vets, and was neutered and microchipped.

Helena Peace, from RSPCA Reading and Oxon borders branch, said: “You could say Simba had a full MoT during his stay with us! He was very lucky that the van broke down as he was in a very distressed state, extremely warm and had very hot paws. If his journey had continued, he may not have survived.

“We’d like to thank the members of the public who rescued Simba and took photos of the van as without them we may not have found his owners.

“We are delighted he is back where he belongs. Sadly my phone hasn’t stopped ringing with people hoping Simba was their missing cat, it was heartbreaking.

“It just shows how important it is to microchip your cat, and keep your details up to date, because it’s your best chance of being reunited with your pet.”

Gemma added: “I always meant to get Simba microchipped but other things cropped up and I didn’t get round to it. I’m so glad he is now. He is so special to us, especially to Imogen, we are so pleased to have him back. We will be keeping a very close eye on him, we don’t want him to go off on any more adventures.”

Find out more about The RSPCA Reading and Oxon borders branch, which cared for Simba, and see some of the animals looking for new homes on their website.

Haven’t had your cat microchipped yet? Here is some useful information about microchipping: