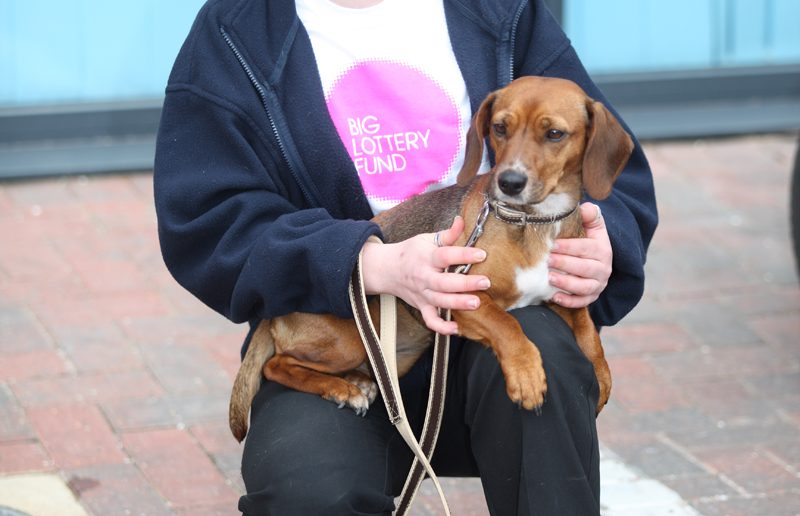 Suffolk’s finest canine carers Louis and Flo have built up a Facebook fan base after a short film playing tribute to them has been watched by thousands of people online.

The pooches are part of the Brainy Dogs project run by Headway Suffolk, which with the help of £60,000 of National Lottery funding, trains dogs to be companions for anyone with neurological conditions – helping those struggling with personality changes to feel loved.

Since their story was featured on the National Lottery’s Good Cause Facebook page it has been viewed more than 14,000 times.

Six year old Flo, who is a Jack Russell and cocker spaniel cross, is even more remarkable as she has a brain condition herself which means her brain is too big for her skull. She lives with her trainer and does home visits to people who Headway support, such as Leah Cudby featured in the film, who has memory and mobility issues after being diagnosed with bacterial meningitis.

Flo also spends time at Headway’s centre in Ipswich so visitors can spend time with her, taking her for walks or feeding or grooming her.

Shitzu Louis lives with Sam, also featured in the film, who credits him for ‘transforming her life’. She said: “I get up in the morning smiling because I know he’ll be there to greet me. I always wanted a dog but it was the training part that worried me. Brainy Dogs have been great. I feel like he’s my battery, like someone puts him on and I’m working, like I’ve been switched on.”

Helen Fairweather, CEO of Headway Suffolk, said: “Brainy Dogs helps anyone who’s had a neurological condition. What we’ve found with people who’ve had neurological conditions is that their personality changes, therefore, they can lose their friends and family because they’re not the person they were before. They need something to love and something to love them so the dog helps them, it fills that gap of being a friend.

Flo and Louis are featuring in the National Lottery Legend campaign which celebrates the life changing difference made by people and project across the UK.

Their story and that of more National Lottery Legends can be viewed here.