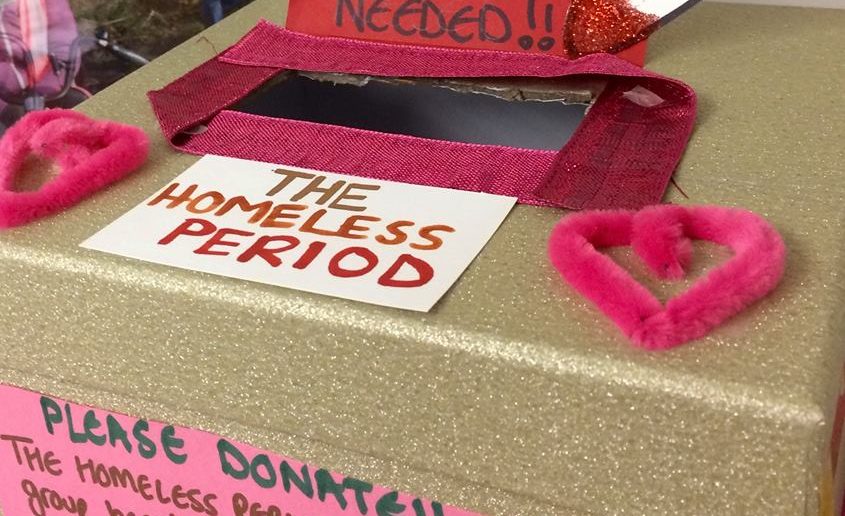 There is no arguing that periods are a burden; painful, messy, time consuming. A small consolation is that most women have access to pads, tampons, toilets, painkillers, clean underwater…little, but important, things which make periods that much more manageable. 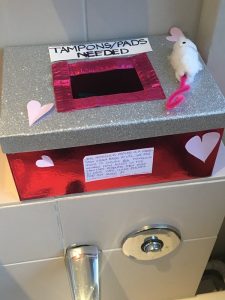 An example of the boxes found in bathrooms around the UCL campus. Photo: Kirsten Ehrlich

But this is not the case for homeless women. With the average women spending over £18,000 on period related products over the course of her lifetime, the vast majority of products designed to help women cope during her period are inaccessible. With around 2,000 women sleeping rough in London, there are a huge amount of people who are forced to bleed on the street. What is perhaps even worse is the health risks that this creates; these women are more vulnerable to infections and toxic shock syndrome.

After becoming aware of these issues, Maddie Dale, a student at UCL, decided to create The Homeless Period Project. She says she started the project after realising that, ‘in 20 years I had never once thought about the fact that a homeless woman has a period to deal with…It actually made me sick to my stomach when I tried to picture myself handing my period on the side of the street.’

Becky Kells has highlighted the taboo which surrounds the topic. She says, ‘Because we’re discouraged from openly talking about our periods, many people aren’t aware of the difficulties faced by homeless women…So our aim is to get as many people as we can talking about periods, and donating tampons and pads.’

Forming links with women’s shelters in the Kings Cross and Camden area, donation boxes have been placed around bathrooms at UCL. Students are encouraged to deposit spare tampons and pads, all of which are donated to these partner women’s shelters. 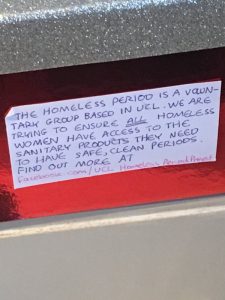 Students have been incredibly generous so far, also donating toothpastes, shampoos and other essentials.

Maddie says, ‘We’ve only been up and running as a charity for a couple of months and we’ve already had enough donations to get the women we’re working with through a number of months of menstruation, I’d say.’

Recently, to collect more supplies and raise more money for the project, a charity gig was organised. With a line up of artists including Martha Gunn, Nuuxs and Polyna, the entry fee of £4 pounds plus donations raised £150 in cash plus, as Becky says, ‘literally bags and bags of tampons and pads, all of which will be donated to local homeless shelters in the local area.’

As the project is still in it’s early days, running only for a few months now, it rely’s on new ideas and members to help out. To get involved and find out more about the work of this incredible project, visit their Facebook page.