By Nisha Kotecha on December 27, 2016 0 Comments
Banjo with Nick White

Young colt, Banjo, was discovered abandoned next to a busy park in Croydon, South London with painful wounds covering his quarters and the top of his back legs. 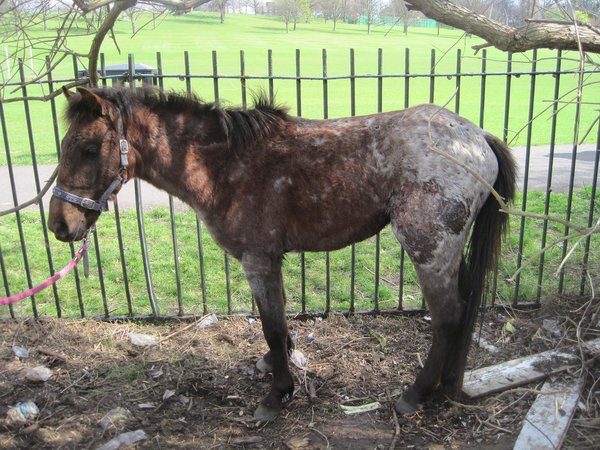 Banjo where he was found in April 2016

“When I first saw Banjo, he was a very frightened little pony and was hiding behind a very deep ditch from the other horses in the field where he had been abandoned. He was standing in the corner, right next to a very popular London park and must have been seen by hundreds of people, but no one had taken the time to notice his terrible condition or made any effort to report him to a welfare charity. He truly was an invisible horse,” Nick said.

“His injuries were so severe that he was unwilling to walk or move at all. His left hind leg was swollen, his flanks were red raw, sore, bleeding and showing signs of infection. There was barely enough for him to eat in the small section of the field where he stood and he was certainly unable to walk to where water was available. Banjo had no microchip and despite making enquiries in the local area, no owner could be found. A veterinary surgeon pronounced him to be suffering so thankfully we could remove him to the safety of World Horse Welfare’s Hall Farm Rescue and Rehoming Centre where he could receive the care he so desperately needed,” Nick continued. 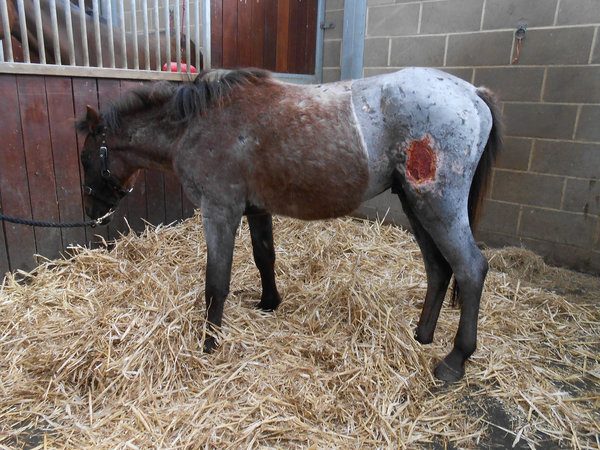 Once he arrived at Hall Farm, Banjo’s wounds were thoroughly cleaned and examined by the team and vet, Andy Williamson, who couldn’t understand how he got his injuries, “One of Banjo’s wounds was so deep that it had exposed the muscle tissue and certainly wasn’t the normal presentation of pressure sores which we often see. It is impossible to explain how he could have ended up with these terrible injuries and he must have been in a lot of pain.” 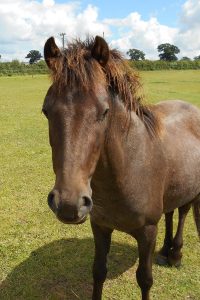 Banjo received laser treatment which stimulates the blood flow and helped the skin to heal over the damaged areas. Six months on, he has made a fantastic recovery and has found a loving new home on World Horse Welfare’s Rehoming Scheme.

“Looking at Banjo now, I’m amazed at his recovery. I never thought that I would see this pony in such good condition with his wounds healed so well.

This is truly what World Horse Welfare is all about. Banjo is a happy, healthy, bright little pony with a sweet nature and his whole life ahead of him. Even though he has been rehomed, he remains in the ownership of World Horse Welfare for the rest of his life so we can guarantee that he never has to go through this suffering again,” a delighted Nick explained.