The latest good news
You are at:Home»Community Spirit»AFC UNITY- Changing the Face of Football

AFC Unity is an alternative, all female football club based in Sheffield. Unity was founded by Jay Baker and Jane Watkinson in 2014 as an independent women’s football team with feminist politics and a grass root approach. Both Jane and Jay have extensive experience in the community sector and have incorporated that experience into the club to make it one of a kind. The club have a strong ethos to utilise their dedication to feminism and social justice in combination with their passion for sports to make a positive contribution in local community.

One of their main values is to encourage women to get involved with football and encourage their development regardless of experience or ability. Whilst tackling misconceptions of sexism in a male dominated sport. As well as promoting fair play and integrity on and off the pitch, AFC Unity are involved in many community projects that utilise football to breakdown divisions in society.

Their main community project is called Football for Food. This campaign is about AFC Unity as a club encouraging players, managers and supports from both teams to not only attend their games, but to also bring donations of food. The team then pass on the donations to Sheffield Food Collective who distribute them to four food banks they work with: Fir Vale, Parson Cross, Firth Park and S20.

So far from their homes games and charity events they have put together like the 5-a-side tournament and sponsored city centre ‘kick-Ups’ they have collected 805 kilograms of food!

As a club their aim is to raise awareness of food poverty in Sheffield and help combat this through the football community. After news spread of their work the club received funding from Awards for All, the Big Lottery Fund and Freshgate Trust Foundation. This has allowed AFC Unity to expand their campaign further, with the money going towards putting on more football fund raisers so they can continue providing for their community. 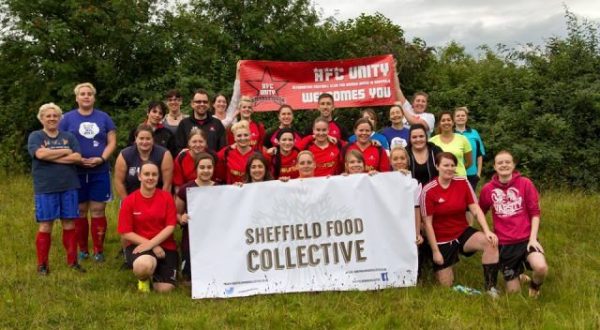 Following on from the success of this campaign, AFC Unity launched another campaign initiative called Football for #FreePeriods, in light of the recent tampon tax controversy. As well as the food donations at matches, the club are now also encouraging donations of tampons and other sanitary products for homeless shelters.  They want to fight period stigma and its association with women, whilst making a stand against the continuing tax in order to help women in need.

AFC Unity have been breaking down barriers and contributing to the wider Sheffield community, all whilst having fun and encouraging women to get stuck into one of the most popular English game. This club have empowered and encouraged women to get involved in football, whilst contributing to the community in a way many of clubs have failed to do. The positivity, beliefs and enjoyment this club brings to people in evident, and since founding the club they now have 2 clubs in the Sheffield women’s football league, and hold solidarity soccer sessions for women of all levels. They also have a variety of community projects and offer volunteer programmes for coaches, physios, sports psychologists and journalists. 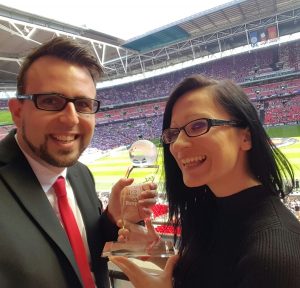 All this hard work and commitment lead the club to win the 2015-16 FA Respect award for the Women’s Pyramid System category.

According to the awarding body, the Football Association, ‘this award recognises AFC Unity’s exceptional work in offering an experience of football which is fair, safe and enjoyable.’

Jay Baker (co-founder) said, “This is the greatest achievement we’ve experienced in terms of football in our short but incredible history, and frankly my co-founder Jane Watkinson and I are astonished and overwhelmed that an alternative football club such as ourselves has been recognised in this way.”

This club is deserving of every growth and success they have gained, and will continue spreading their strong and positive football ethos.