Crowdwish was launched by Bill Griffin in 2014. “I know this sounds completely ridiculous, but I wanted to create a site where people could come and ask for literally anything and get a meaningful and freshly generated response.”

Bill was initially inspired by seeing groups of people coming together online to create outcomes for themselves that they wouldn’t have been able to achieve on their own – from Kickstarter to the use of social media during the Arab Spring.

Each day, Crowdwish offers a selection of new wishes and promises suggested by their online community to take meaningful action. The most popular wishes are actioned – sometimes in a small way and sometimes in a bigger way. 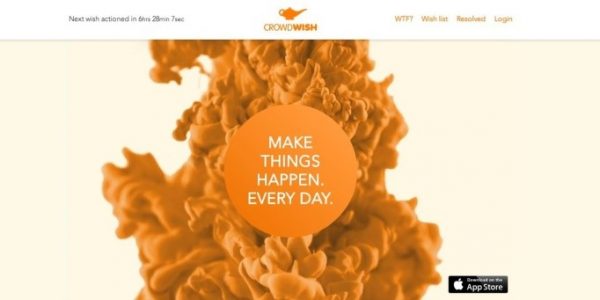 Not all wishes have social change at their core but many do. For example, a wish for help by the friend of a woman whose house was about to be repossessed saw Crowdwish set up a crowdfunding page which paid for the woman to move into a friend’s house and provide her with some initial financial support.

Sleeping bags have been given to homeless people, free fruit given to those who need it and one woman made a wish on behalf of a friend whose husband had died. She has been his carer for years but had been totally floored financially by medical bills once he died. Crowdwish set up an appeal in the USA for her and raised $1,000 in 48 hours to pay the most urgent bills.

Wishes related to older people are quite common. After she was mugged, Crowdwish replaced a pensioner’s handbag, its contents and £100 cash, after people wished that older people were treated with more respect.

The latest wish, at time of writing, to be actioned is Crowdwish 1113: ‘I wish that being happy was easier.’ In response, the Crowdwish team has offered to send a signed copy of a cookbook written by Rachel Kelly (who has lived through acute depression) and nutritionist Alice Mackintosh – which should brighten up the days of five people a little at least.

The site is still active, and one wish every 24 hours still gets actioned, as it has done for over 1,100 days. You can download the app from the app store, visit the site at www.crowdwish.com and see the archive of wishes at blog.crowdwish.com/archive.