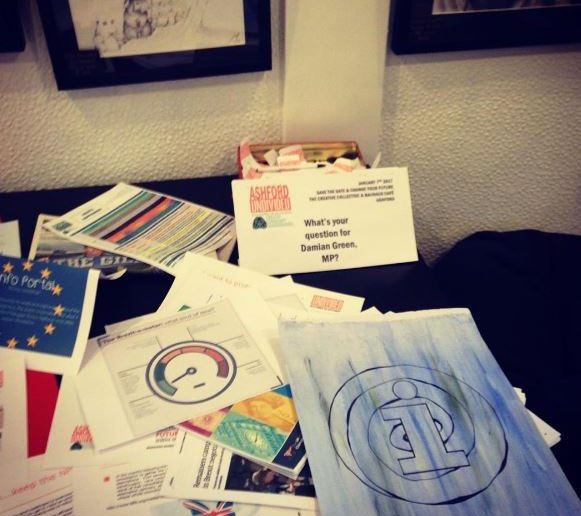 Creative Community Changemakers. That was the theme of Ashford Undivided, and in a day packed full with workshops, discussions and collaboration those three values were exhibited in abundance.

Part of the nationwide Undivided platform, which seeks to help young people have their voices heard in a post referendum Europe. We were keen that the event wasn’t seen as either pro or anti Europe – just acknowledging that things are changing, and we have an opportunity to be involved in that. And a fun way to do so would be through art and creativity. Hosted at the Bauhaus Café, a venue and project run by Betsy, who really lives out her passions and belief in creating change through connection and creation, it was a day of celebration.

Those who attended really embraced the concept, speaking out to explore positive ways to improve their experience of Ashford and life. Everyone was encouraged to say and share what would make their town better, be that health, art, employment, environmental issues, accessibility, infrastructure, education – and all of these and more came up! 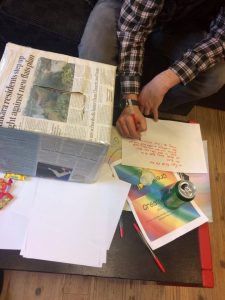 Chris Buckett from Kent Urban Sketchers sat down with a group to draw their ideal streets, an activity that showed just how important the idea of community space, green areas and lively streets are for people. Natasha Boardman-Steer, as self defined urban innovator, asked people where they wanted to explore in Europe and why, demonstrating a continued connection with the continent, helped people make badges to show what they are proud of about Ashford, and captured it all on video.

Postcards from the ideal Ashford of the future were a great way to imagine how the town could look, and cut up and black out poetry ideal ways to recycle words to make statements of positivity. Slogans on t-shirts have always been important for activism, and designer and bespoke dressmaker Caroline Bruce worked with us to upcycle old material and wear our message with pride, whilst also sparking conversations about sustainability and the environment.

The Boss(y) Girls Project ran a workshop on gender and relationships between men and women, which saw people of both sexes fired up about inequality, and Kent Refugee Action Network and Ashford BME Association were on hand to speak to attendees. 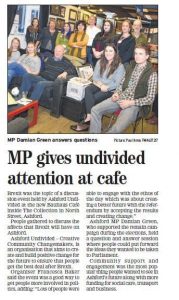 We were thrilled that MP Damian Green came along for a discussion about his role as MP for Ashford in all of this and what politicians can do for us. In an energetic conversation amongst young and old, right and left, those who grew up in Ashford and those who moved here, we discussed the importance of being part of your community, thinking critically about politics, taking part in discussions about issues facing you and your area, and being a doer and not just a complainer.

We hoped that people would leave feeling excited and empowered, regardless of political affiliation, creative confidence or experience, and that new friendships and partnerships would be formed as a result.

More than 150 ideas were generated and sent to Undivided, who will now put those forward to Parliament.

As the evening closed and faces left as bright as the canvases and crafts across the room, there was definitely a sense of hope that in this community change could happen- and people could make it.

Francesca Baker is a writer, researcher, marketer and all round creative and curious individual, passionate about community, creativity and connection. Armed with pencils, coffee, headphones and a spring in her step, she likes to explore and scribble her way through life. Find out more at www.andsoshethinks.co.uk and follow her in a legal way on twitter here https://twitter.com/andsoshethinks