If you’ve been a fan of Ruby Wax’s work on mindfulness for some time now, like me, you’ll be pleased to hear about her timely ‘Frazzled Café’ initiative in partnership with Marks & Spencer. 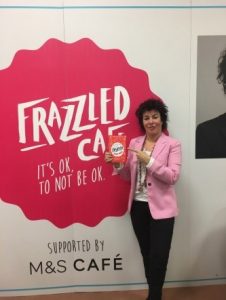 With the economic cost of mental health problems in the UK estimated at roughly £105bn a year and 4m prescriptions for antidepressants written annually (official figures last year showed the number of antidepressants given to patients in England has doubled in a decade) projects to help tackle mental health issues should be celebrated.

Many (if not all) of us will admit to feeling overwhelmed by the stresses of modern life at times. Frazzled Cafe meetings provide a ‘talk-in’ place where people who are feeling frazzled can meet on a regular basis to talk and share their personal stories in a safe, anonymous and non-judgmental environment.

The retailer, Marks & Spencer, is to host fortnightly ‘Frazzled Cafes’ in 11 stores at which people can share their stories. The project was trialled in some M&S offices and two stores last year with the decision to commit to the project confirmed this week.

The Frazzled Cafe project, which is in the process of becoming a registered charity, stemmed from the public response to Wax’s book A Mindfulness Guide for the Frazzled and the accompanying theatre show.

The fortnightly sessions at M&S stores will be hosted by trained volunteers in restaurants that have closed for the day. They will initially be held in 11 stores with more locations to be added in the coming months. The branches taking part include three in London as well as outlets in Nottingham, Leeds and Newcastle.