It took one island in the 19th century to spark the idea of forming a National Trust, the largest UK conservation charity protecting buildings, monuments and green spaces and makes sure they remain open to the public rather than being held privately.

Canon Rawnsley was blown away by the uniqueness of the island but was saddened to see it sold. He loved the Lake District landscape and felt urged to have those places protected from developments.  The Grasmere Island inspired him to propose the idea of an organisation, a trust which would protect green areas, historic buildings and other monuments in order to keep them open to wider public. Two years later, on 12 January 1985 he found the National Trust together with Sir Robert Hunter and Octavia Hill.

Now, the inspiring and beautiful island has been given to the Trust in a will. Dave Almond, National Trust manager commented: “It’s fantastic that 124 years after the private sale of Grasmere Island, the view that can be enjoyed from Allan Bank and that has inspired so many, will now be protected forever, for everyone. The island provides a quiet haven for wildlife, including a heronry comprising four nests that have established here almost certainly because of the relative lack of human disturbance. The magnificent ‘Medusa-like’ veteran oak on the island has become engulfed by the surrounding younger trees. This is such an important tree ecologically because of the wildlife that it supports, but some work will need to be done to give it the space it needs. It’s an exciting prospect and we’re looking forward to carrying out some wildlife surveys, such as bat surveys, to see what species are present.” 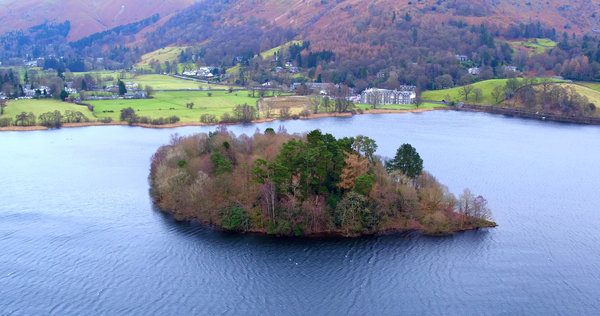 National Trust is a heritage charity established in 1895 and continuously looking after placed in England, Wales and Norther Ireland. Types of places the Trust takes care of spread from forests and woods across historic houses to pubs. Money raised through the Trust’s fundraising activities are used to restore and protect places in order to keep them open and accessible to everyone. They constantly put effort into getting more places under their protection. Once a place is donated to the National Trust, it is in its care forever.

Their efforts does not help to only preserve the places for public but to protect otherwise endangered species as well. Among others, barbastelle bats are welcome residents in some of the building the trust manages, granting them protection and space to live. And they also grow vegetables typical for 18th century which you do not come across in your local veggie stall. They include white radishes and prickly cucumbers which they also serve at the Attingham’s Park Carriage House.