Mary O’Neil, a 96-year-old parishioner from Welwyn Garden City who volunteered for the aid agency CAFOD for 40 years has been presented with a Papal Blessing in recognition of her relentless efforts in helping other people. 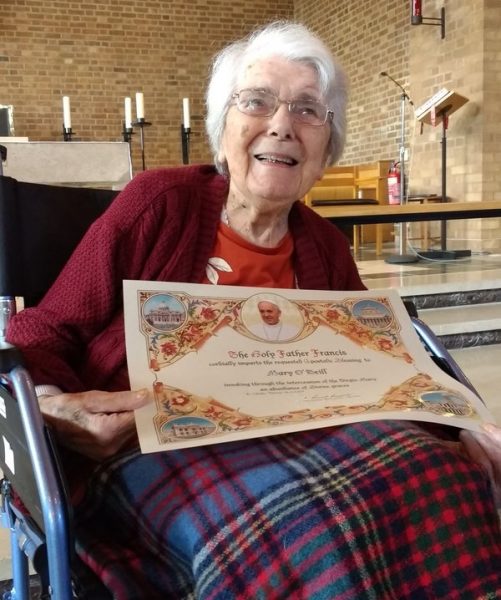 Mary with her Papal Blessing Certificate

Issued by Pope Francis, the Papal Blessing Certificate was awarded at a mass at her parish, which was attended by family, friends and CAFOD representatives.

Mary began to actively volunteer with CAFOD in the 1970’s. In 1972 she founded the Holy Family CAFOD group and became secretary. During her time as secretary of Holy Family’s CAFOD group, Mary was instrumental in organising and assisting at fundraising events. From raffles and quiz nights to international food evenings, the group was relentless in their commitment to raising money for CAFOD.

Some of the events they began, such as the Strawberry Tea Garden Party and the Summer BBQ have become parish institutions, annual traditions that continue decades later.

Mary’s talents were not constricted to fundraising, however. In the 1980s she volunteered at CAFOD’s Head Office and alongside her husband Bill, Mary was an active campaigner for Justice and Peace, supporting movements such as the Campaign Against Apartheid. Mary and the Holy Family CAFOD group were also instrumental in making the parish Fairtrade, before going on to encourage Welwyn Garden City to become a Fairtrade Town.

By the time Mary stood down as secretary of Holy Family’s CAFOD group in 2007, she was 86 years old and had led the group for 35 years.

The efforts of the Holy Family group, the unending generosity of the Holy Family parish and the continuous support of parish priest Fr. Nobert, had resulted in the parish raising an astonishing £100,000 for CAFOD since the group’s founding in 1972. 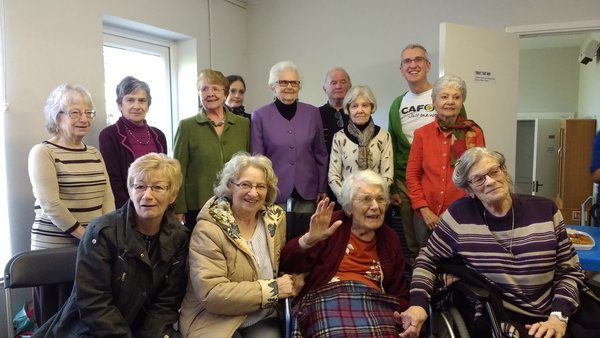 To find out more about volunteering for CAFOD please click here.