A man crawling the London Marathon to raise awareness for gorillas has completed the 26 mile course almost a week after he crossed the start line. He has raised over £40,000 online for the Gorilla Organisation so far. 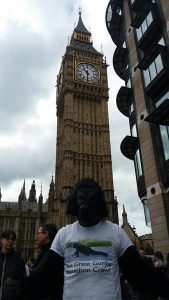 “Mr Gorilla”, also known as Tom Harrision, is a Metropolitan Policeman and father of two. He spent, on average, 12 hours a day on his hands and knees or hands and feet – alternating between the two to save his blistered knees.

He averaged at about 4.5 miles per day before finishing the course at 10:34am Saturday morning.

In the evenings, the 41-year-old exchanged his gorilla costume for pyjamas, sleeping in friends’ houses before starting again at 8am.

He had helpers along the way guiding him, to avoid trees and lampposts, due to his limited, Gorilla-masked vision.

Tom is no stranger to running the marathon, even clad in a black fur suit – he also ran the 2016 London Marathon dressed as a gorilla as well as Tough Mudder and the Great Gorilla Run.

He stated that this year, he wanted to ‘do that little bit more’. While the 26-mile trek was all too familiar to him, he said being at exhaust level made him notice the city’s pollution much more. ‘It was really catching my throat’, he added.

Tom said he was excited to finish the race then get a massage and a cup of coffee. During the race, Tom was unable to drink coffee as he was suffering from heartburn. ‘Your stomach isn’t used to being in that position’ he said, ‘so it gave me heartburn’.

Mr Gorilla crossed the finish line with his two children, who were also dressed as gorillas.

He was met by Gorilla Organisation chairman, Ian Redmond, alongside TV personality Bill Oddie who awarded him with a trophy and stuffed gorilla.

All money raised is going towards the conservation of gorillas in Rwanda, Uganda and DR Congo.