The 4th annual Rotary in Great Britain and Ireland Champion of Change Awards took place in April, recognising the incredible voluntary work carried out by Rotarians over the last year.

Taking place in the House of Lords, and with special guests the Rt Hon Baroness Harris of Richmond and the Rt Hon the Lord Hague of Richmond, a total of 17 awards were given to awardees from four different categories; the international category, for volunteer work done outside Great Britain and Ireland, the domestic category, the community champion awardees, recognising the work of non-Rotarians, and the Presidential Awardee. 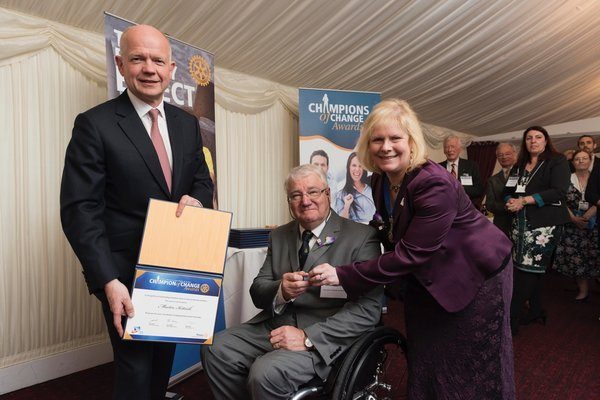 Rotary in Great Britain and Ireland is a network of over 1,800 clubs and 50,000 members, working to make a difference both domestically and abroad. All the clubs are based in local communities, but carry out work locally, nationally and internationally. From sponsored bike rides to supporting charities such as Children in Need, from national initiatives such as Know Your Blood Pressure Day to working to help eradicate world hunger, Rotary has, since its foundation in 1905, existed to make a positive difference in the world we live in today.

Below are 16 inspiring ‘Champions of Change’ we’d like to introduce you to:

Richard has planned, organised and implemented several projects to bring water to communities in Nepal. New water supplies that are free from harmful contamination have been added to five rural communities in the country thanks to Richard’s work.

David set up Our Street Our Children (OSOC) with his wife Jackie in 2012 to reduce the dangers and increase opportunities for street children in Nepal by providing food, shelter, clothing and improved education.

Robbie’s work has led to the provision of education to over 300 children in Southern Uganda over a period of around 20 years. In addition to improving the prospects of these children immeasurably by upgrading local education to A level standard, the Amazing Love School project has also provided life-changing facilities such as a hygienic girls dormitory and toilet block.

Ian has worked for over 10 years with Literacy in a Box, a Rotary club derived project set up to give the children of Zambia hope through education. Ian visited the Manaca Community School in 2013 to find it was nothing more than a converted chicken shed, but over the next two years, working with partner organisations who refurbished the school, Ian helped supply 20 literacy boxes full of education equipment and £3000 worth of textbooks for 400 pupils so they had access to a functional and secure learning environment.

Working with charity Rise Against Hunger, Irene led an effort to raise £25,000 from 28 different Rotary clubs. With the money raised, over 500 volunteers, aged six to 92, packed over 100,000 meals in August 2016, which are now feeding children in the poverty-stricken area of Nairobi, Kenya.

In the aftermath of super typhoon Haiyan hitting the Philippines in November 2013, Patricia initiated a fundraising campaign which initially raised £5,000 with a street collection. Under her leadership, this was eventually turned into £44,000 enabling the financing of 80 motorised fiberglass fishing boats to help replenish the lost fleet on the island of Kinatarcan. 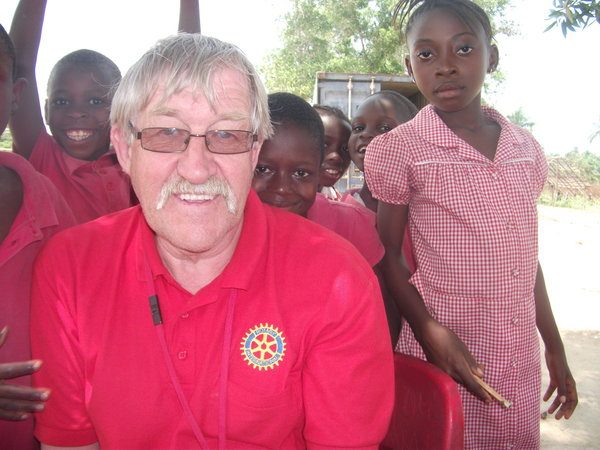 David Wallwork who on a visit to Freetown in 2005, as part of a group working to extend a Fistula Clinic operated by Mercy Ships, became aware of the physical and emotional problems associated with life in this poverty-stricken and war-ravaged country.

David became aware of the dire conditions in Sierra Leone on a trip there in 2005. It became his aim to provide high quality, free education for the Temne tribe in a rural area of the country, where residents speak their own language and are unable to read or write.

What followed in 2008 was what the locals called ‘The David School’. Since then, the project has seen the opening of a refurbished primary school and newly built secondary school and living accommodation for staff. The site teaches around 360 pupils during the day and offers adult education programmes in the evenings.

Janet has helped to make Peterborough a leading city when it comes to improving the lives of those suffering from dementia. She helped to form the Peterborough Dementia Action Alliance, achieve £1.5 million worth of funding for a Dementia Resource Centre and started up Peterborough’s very own Rotary Memory Café.

Martin has worked tirelessly for the last 34 years to improve the way that disabled people are treated. A former Royal Marine, Martin was left wheelchair bound at the age of 23 following a serious accident whilst on a training exercise. He campaigned to change the law to give servicemen and women proper compensation, and now spends time working with limbless veterans to support them with their rehabilitation and reintegration into society, as well as mentoring and inspiring young people.

Geri has been at the forefront of projects supporting people with dementia and their carers and has very much been the catalyst in Tavistock becoming the first Dementia-Friendly Community.

She has united the community to set up Memory Cafés and has been involved with the building of Sensory Gardens, resulting in the awareness and understanding of dementia locally increasing significantly.

Graham was President of Keswick Rotary Club when devastating floods hit the north of England in December 2015. His swift action and local knowledge enabled help to be provided immediately to those in need and also assisted in facilitating longer term restoration funds to the community.

Lee is tireless in his pursuit of fine-tuning existing projects and introducing new themes to encourage kids to ‘go beyond’ their capabilities. Climbing and abseiling, canoeing and zip wiring are among the activities on offer, while nature and stream walks, den building, and orienteering are also available. Lee’s leadership and drive enhances the lives of all of the young people using the facilities at Petty Pool Centre in Northwich. 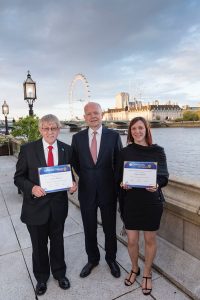 After a visit to Malawi in 2009, Katie witnessed first-hand the problems of hunger, disease and shortage of orphan care. She therefore set up Malawi Foster Care, a charity supporting orphaned boys who often have no shelter, no access to education and very little food.

The project has received a great deal of support from West Wirral Rotary Club, as well as clubs in Malawi, and has now built three boys homes and is being extended to support the elderly in outlying villages who also care for the orphaned.

When Chris had a visit from a group of six autistic children in 2002 to his small commercial nursery and garden centre, little did he know that 15 years later, the site would grow to support 200 people a week with gardening, cooking, drama and art activities.

The Butterfly Garden in Cheltenham is an educational, therapeutic and recreational scheme for people of all ages with disablement of any kind, run entirely by volunteers, including Chris who acts as the garden’s Project Coordinator.

Peju of Haven of Rest has devoted her time and resources to fundraising for projects and mobilising professionals to support and empower the community in Chitsotso village in Zimbabwe. Haven of Rest works with girls who have been sexually abused and as a result have suffered significant trauma.

The project delivered health education to the girls and the Chitsotso community as a whole, as well as donating equipment and building a new road to improve access to clinics and their services.

Betty, supported by a fantastic band of happy volunteers has been a mainstay of Age Concern Broomlands and Bourtreehill for just over 40 years. As a founding member of the organisation in 1975, Betty leads a team of volunteers who give up their time and talents to help people locally.

Having been privileged to be able to attend the awards ceremony and hear the individual stories of the work done by each of the individuals to achieve their award, I couldn’t help but reflect on the positivity and goodness that does indeed exist in the world. Although it is so easy, and common, to paint the bleak picture of a humanity dominated by violence and greed, the stories I heard reminded me to fully reflect on and appreciate the incredible work being carried out every day by the wonderful individuals who do exist within organisations such as Rotary.