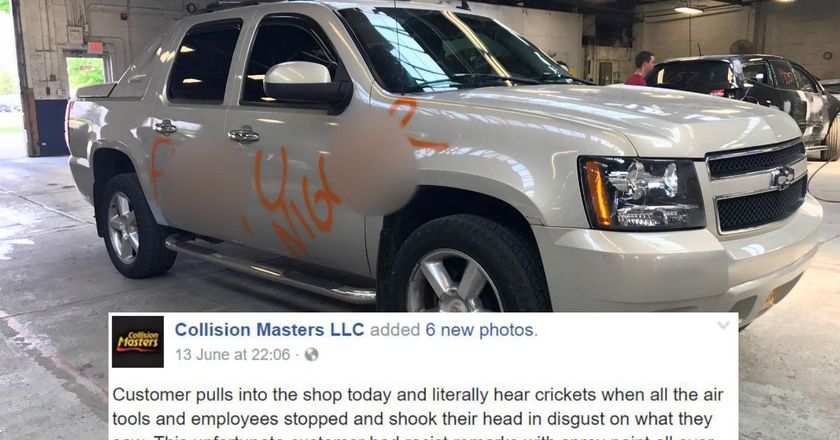 When life gives you lemons, you can either complain about how sour they are or you can squeeze them into water, add sugar and make lemonade. We’ve heard expressions like this which challenge us to change our attitudes, look at the bright side or somehow turn bad into good. Recently a Buffalo New York auto repair shop did that and more.

A young black man, known only as “Mr. King,” drove his Chevy truck into Collison Masters, an auto repair facility in downtown Buffalo. His silver truck had been spray painted and covered with graffiti. He wanted an estimate on how much it would cost to remove it. 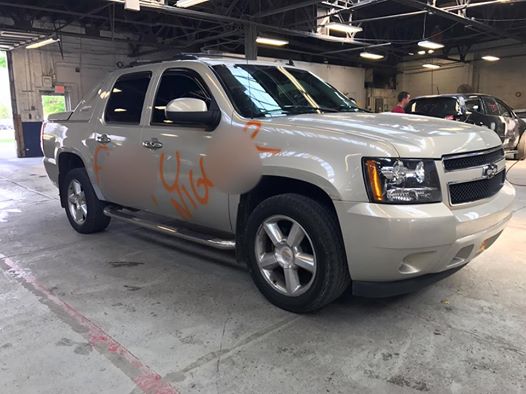 Workers were in shock when they saw the profane and racially hateful words sprayed all over Mr. King’s truck. Owner Frank Todaro heard gasps and then silence from his otherwise lively employees. He looked at the hateful language all over his customer’s truck and knew he had to make it right.

Mr. Todaro enlisted the help of his head painter to find a chemical which could safely remove the spray paint without damaging the finish on the vehicle. Instead of assigning two people to work on the job he used eight. A task that would normally take up a whole shift was finished in 30 minutes and at no charge to Mr. King. Mr. Todaro and his employees just wanted to make this go away and turn it into a good deed.

Mr. Todaro told this story on his company’s Facebook page. The next day he had thousands of likes and shares. This generated local television coverage which spread his story even further. He was rewarded by State Senator Tim Kennedy with free lunch for the entire shop.

Because of this incident and the word getting out, an anti-racism rally was organized in Cazenovia Park on June 15th. Buffalo residents gathered with anti-racism signs and signs that read “I am home,” a way to let it be known that all are welcome in Buffalo and that hatred, racism and bigotry will not be tolerated.

Mr. King, later identified as Henry King of South Buffalo, spoke with the media. He expressed that he was quite angry when it happened and tried to avoid going home so his neighbors would not see the racist language. He does not know who did it, but suspects it was a neighbor who wanted to make sure he knew he was not welcome.

Mr. King’s anger turned into humility at the outpouring of love and support. The vandals have not been caught, but police are still searching for them. A terrible assault on a fellow neighbor was turned into a ground swell of love, support and intolerance of this behavior.

Unfortunately we can’t stop instances like what happened to Mr. King from occurring. There will always be evil in the world, and there will always be hatred, intolerance and racism.  What we can do is make it clear that these offenses and actions will not be tolerated.

Racism is already socially unacceptable but it still exists. We need to expose it when we see it and counter anyone who engages in it.