‘Imagine if Keira Knightley rang you up to remind you that you have a doctor’s appointment!’

Substitute Ms Knightley for Italian actress and model Monica Bellucci, and this is how a project masterminded by Senegalese charity-worker Mamadou Sall was described during an interview with French-based heath foundation, the Observatoire de la e-santé dans les pays du Sud (The Global South e-Health Observatory).

Mamadou Sall’s project first started in September 2016 and is known as Karangué, which means ‘safety’ or ‘security’ in the local Senegalese language of Wolof. Using the voices of Senegalese music icons such as Youssou N’dour, Baaba Maal and El Hadji Ndiaye, the web and mobile app aspires to reduce infant and maternal mortality rates in the poverty-stricken country by reminding mothers-to-be of the importance of ante- and postnatal medical appointments. Mothers can sign up to the automatic alert system online or with their nurse, and then receive text or phone reminders about vaccination appointments or schedules and about ante- or postnatal doctor’s visits.

According to Karangué’s website, every 16 seconds a child dies from an illness that could have been prevented with a vaccination. Senegal in particular also has one of the highest maternal mortality rates in the world: nearly 2,000 women die every year in childbirth (around 5 women a day).

While simply getting celebrities to phone future mums to keep them up to date on doctor’s appointments may not seem like the most effective way to improve these shocking statistics, Karangué points out that some of the major reasons behind these high death rates are illiteracy, lack of education and lack of familiarity with infant vaccination schedules. 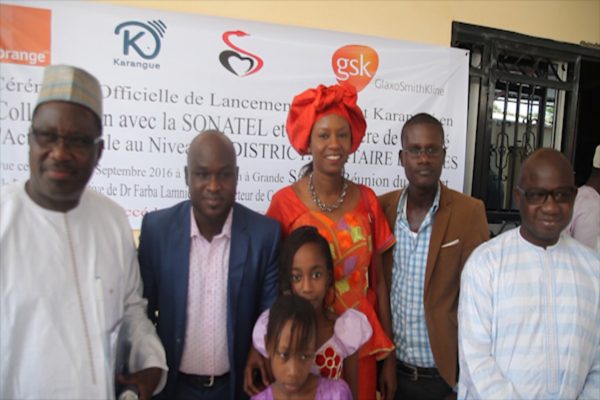 That’s why, according to Mamadou Sall, sending out star-studded voice messages is a practical and valuable solution. With public health education very minimal in Senegal, and with the high rates of illiteracy among women, voices are more powerful than writing.

“The cultural context is very important to convey this sort of message”, explained Mr Sall. “These famous people are best placed to get this information across. They are the ones whose voices really carry weight”.

What’s more, although the official language in Senegal is French, some 36 languages are spoken in the African nation, with only around 30% of Senegalese people actually having any knowledge of the French language. For this reason, the app uses local languages such as Wolof, Serere and Pullar to raise awareness of the importance of vaccinations, to encourage women to give birth in healthcare facilities and to promote the attendance of antenatal and postnatal appointments.

But Karangué doesn’t just limit itself to mothers. The initiative also recognises the importance of the father during pregnancy and during the child’s life, and seeks to promote paternal involvement in childcare. It also offers help and advice on broader public health issues, such as advising pregnant women during the Ramadan fast.

As well as getting celebrities on board, the project has received the attention of big businesses in Senegal, and is now supported by the Senegalese State as well as by telecommunications firms such as Sonatel and Orange.

The app is already witnessing incredible success. In the seven months since it was founded, nearly 10,000 women have started being monitored by healthcare professionals. Karangué has already sent out 52,372 text messages and a staggering 712,820 seconds worth of voice calls have been transmitted.

And the effect of this achievement is perceptible. According to Mamadou Sall, within the communities that are already using the app, vaccination rates have jumped by 15%, with these areas now nearing 95% coverage. Thanks to Karangué, the number of women who don’t turn up to the four antenatal appointments recommended by the World Health Organisation has fallen from 25% to just 8%.

After seeing the success that his project has already had, Mamadou Sall hopes to extend the work of Karangué across all of Senegal. But the ambitious young man does not stop there: his wish is to see the app spread abroad as well, into other West African countries such as Mali and Niger.

Having dropped out of university to commit all of his time to Karangué, Mr Sall is a true health entrepreneur committed to progress and change: “I wanted to serve the community”, he enthused, “to be useful”. “There are many things to do in e-health; we have to move forward gradually, step by step, but the desire [for progress]is there. I think I’ll have done my part when I see maternal and infant mortality rates go down”.