Eight–year-old Genie was chosen in recognition of the incredible support and inspiration she has provided for Evie Henderson, who was diagnosed with bone cancer in March 2016.

Throughout her treatment, Evie has drawn strength from the bond she has with her beloved pet, watching videos of her from her hospital bed and telling doctors that she needed to get better so she could go home to see Genie. When Evie’s hair started to fall out, she noticed that Genie’s fur was moulting and said that it helped her feel like she wasn’t alone.

Genie beat four other amazing moggies to take the overall crown after winning the Outstanding Rescue Cat category. The other category winners were: 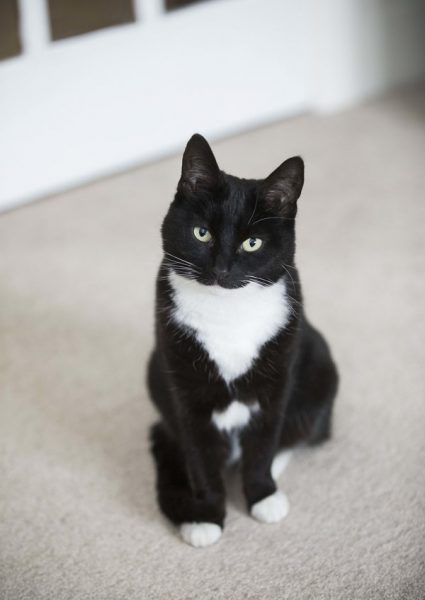 Receiving her trophy from the judges, Evie said, “I’m utterly stunned. I really can’t believe it. Genie (pictured, left) deserves this so much. I was so happy to win our category but to win again is really amazing, incredible. It’s fabulous; I’m shocked, surprised and delighted by my cat at the same time.

“Genie will be getting some extra treats tonight.”

Presenting the award, Anita Dobson said, “This year’s vote was really close, they were all such worthy category winners but one had to win. In the end, it just had to be Genie.

“None of us could fail to be moved by the close bond that these two share, a well-deserved win.”

Genie follows in the paw prints of a long line of feline heroes honoured by Cats Protection. They include Tink, who saved their owners from a house fire, Jessi-Cat, who was celebrated for helping a seven-year-old boy cope with Selective Mutism, which is a condition which affects his ability to speak, and Nelson, a one-eyed former stray from County Durham, who survived nearly drowning and 15 years living rough.

Kate Bunting, the awards organiser at Cats Protection, said: “Cats and children frequently share a special bond, and it’s clear that Evie and Genie have always been close. But what’s so wonderful about their story is how that special relationship provided such a tower of strength and inspiration when Evie needed it most.”