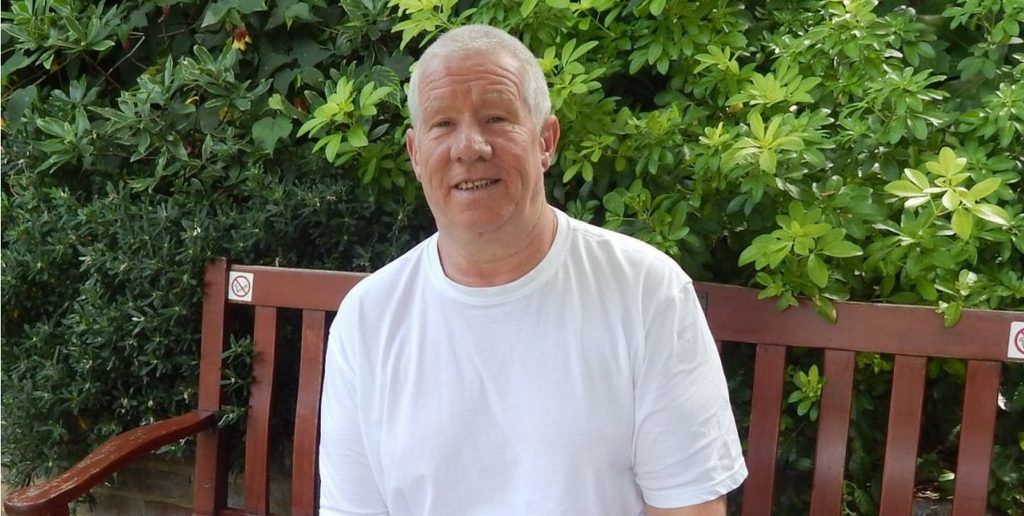 “John is truly an inspiration and we are very lucky to have him as an extension of our team!”

It might surprise you to learn that the quote above is about a man who had a troubled childhood and left school at 15 without any qualifications.

John was born in Highbury, London, to a young single mum who was still in her teens. They had a good relationship and a happy home. A few years later John’s mum married and he got on really well with his new step dad.

Sadly when John was just nine his mum tragically died in a road traffic accident. He was devastated and his life changed dramatically.

John’s step dad, a young man himself, tried his best for a while. Eventually he met someone else and dropped John off at one of his aunts and over the next few years he was passed from one aunt to another. John admits he was a troublesome boy and he wasn’t surprised that his aunts couldn’t cope with him.

He didn’t like school and by the age of 10 he was playing truant and working at fruit and vegetable markets instead. Needless to say he left school without any qualifications but continued to work at the markets which he really enjoyed.

John had his share of issues over the years, with relationships and alcohol but he decided he wanted to challenge himself and his emotional resilience. Could he separate life as a volunteer from his personal life? He decided to give it a try and became a volunteer befriender at Marie Curie.

He found that he could relate to loneliness and fear of being alone and he enjoyed spending time with people through the volunteer role.

John decided he wanted to do more and in 2013 he joined St Joseph’s Hospice’s award winning Empowered Living Team (ELT) programme and was one of the first volunteers to be trained.

While John’s life hasn’t been easy, he’s kept going and through volunteering he has found things he loves to do.

“Walking through the doors of St Joseph’s six years ago was the best decision I ever made. It keeps me busy and out of trouble and I make a difference to people’s lives. That means everything to me,” said John.

John has worked with lots of patients at St Joseph’s, helping them improve their quality of life and regain their dignity through a programme of exercises that are planned by St Joseph’s physiotherapists but carried out by the volunteers.

One patient that stands out in John’s memory is Mike*, whose mobility wasn’t good and, although he had a bed and a toilet downstairs in his house, he would often fall on his way to the toilet or wouldn’t make it in time, which he found humiliating, particularly when his wife had to clean him.

The Empowered Living Team (ELT) went to visit Mike and together they set some goals; to restore his balance and improve his mobility so that he wouldn’t fall and could reach the toilet. The beauty of ELT is that people’s goals are all different and a personalised programme is developed for each person. Sometimes just being able to brush their own teeth or dress themselves is what they want to achieve. The ELT volunteer is then given a programme to follow with the patient and they work together to achieve these goals.

With John’s help Mike was able to spend one final Christmas with his family, and enjoy it, with his dignity intact. That meant a lot to both of them.

Working with ELT has given John so much confidence that two years ago he decided he wanted to get some qualifications and so at the age of 54 he went to college to study health and social care.

He wanted to give his best to the patients he worked with and he passed his exams with flying colours. The staff at St Joseph’s have nothing but praise for John, as the quote by Ameena Rahman at the top of this article shows.

John said, “I love it at St Joseph’s, the way that people are looked after here and the genuine care they receive is just exceptional. I don’t see myself ever leaving here, it makes me happy working with these amazing people and it’s so rewarding to see the progress of the patients I work with. I still test my emotional resilience from time to time but I never show it in front of a patient, it’s all about their time and not mine.”

John’s story shows that challenges you face in life don’t have to define you. If his story has inspired you, please share it. And if you would like to become an ELT volunteer, please contact Ameena Rahman, a.rahman@stjh.org.uk or call 020 8525 6064.

*Name changed to protect his identity