Music is so powerful- it can lift your mood, take you back to a special moment, or even- some research suggests- help relieve back pain and improve memory loss.

People receiving care at the Marie Curie hospice in Bradford have been given the opportunity to use music in a different way.

27-year old Ben ‘Buddy’ Slack from Leeds, a professional musician, visits the hospice weekly and works one-on-one with terminally ill patients, helping them to draw on their inner creativity and develop a song that captures their experience.

Running since May 2017, The Swansong Project – which run in association with the Piece Project, and funded by National Lottery’s Awards for All and the Sovereign Healthcare Trust – has already been having a remarkably positive effect on those who have taken part, allowing them to reflect on their lives and come to terms with their illnesses.

One lady, who passed away at the hospice in July, even decided to have her song played at her funeral as a final message to her loved ones.

Ben is now seeking more funding to further develop and expand the project.

“As a songwriter myself and a student of song writing in general, I hear lots of writers talking about how song writing helps them make sense of the world. I think that’s a general benefit of song writing but for people in the situation of being terminally ill, that must be so hard to make sense of. Getting it down in the form of a song, you have to boil it down into a core-message. You’ve got to get down to the essence of what you want the song to be about,” explains Ben.

You’d imagine the songs written to be extremely sad, but Ben says this isn’t the case, “I’ve not written one sad song yet.

“There was one person who at first seemed like they wanted to write something quite sad about how hard their life had been. But when I asked them what message they wanted the song to have, they decided that they didn’t want to leave behind a sad message and they started thinking about things differently.

“Lots of the songs are very emotive but it’s all positive. Most of them have been like; something difficult is happening in my life but I’m ok with it. A lot of it is about people’s strengths, people’s kindness. It’s really sweet.”

Nicky Denbow, Lead Nurse at the Marie Curie hospice Bradford, is a big advocate of the project. She said, “What we’re doing with The Swan Song project is really quite exciting and unique – we’re giving the patients an opportunity to tell their story and leave something very special behind for their loved ones. The project has only been running a short while but we’ve already seen how powerful this can be – the therapeutic benefits of both music and storytelling are well known, so to be able to combine both of these, is just wonderful.

“At the hospice, we aim to deliver person-centred care and I think this is a really great example of that. The project has created such a buzz that now even the staff at the hospice want to get involved and tell their stories! One nurse has just started sessions with Ben, so we’re excited to hear how that turns out!”

Ben, who had previously held group song writing workshops in the community, first came up with the idea for Swansong when his grandma died two years ago.  He explains,

“Towards the end of her life, me and my uncle, who I performed music with, were signing my grandma’s favourite songs to her. She was pretty much non-responsive because she had Alzheimer’s but when we began singing to her, she lit up and started tapping her fingers. It was an amazing thing, so I always remember how powerful that was.

“With her Alzheimer’s the music memory seemed to stay longer than everything else. She’d forget lots of things but you’d start singing an old song to her and she’d remember all the lyrics – it’s really fascinating. And I was thinking how nice it would be to have a recording of my grandma singing with us, because she would always sing with us when we had our guitars out, and then I thought, that’s what I do basically with the song writing workshops, so I could do that in hospices.”

Recently, Ben has worked with Alan, 62, a former assistant head teacher, who is living with Motor Neurone Disease (MND).  Alan visits the hospice weekly to attend a clinic for people with MND. He was introduced to Ben by the nurses and given the opportunity to be among the first to take part in the Swan Song project.

Although “not a traditional romantic type”, the project has given Alan an opportunity to tell his wife how he feels about her and the support that she has given him since he was diagnosed with his illness.

“Alan was very enthusiastic right from the start and as soon as he’d heard about the project, he’d had this idea that he’d wanted to do this song for his wife.

“He told me himself that he’s never been a particularly expressive person and getting anything out of him can be a bit difficult. But he’s great for detail. He’d tell me lots about what he wanted in the song,” said Ben. 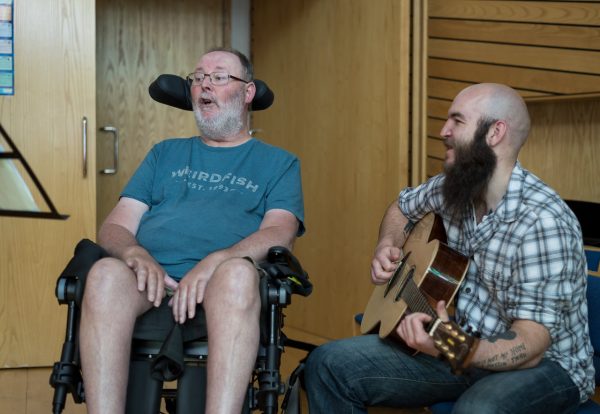 Alan ‘wanted to do this song for his wife.’

Alan’s family didn’t know he was taking part in the project, so it was a nice surprise for them.

He explains, “I wanted to share my thoughts in a way that was perhaps difficult to do face-to-face, without really thinking about it. When the Swan Song project came along, I had an idea in my head that I wanted to explore and it seemed like a really good way of doing it.

“When I was first diagnosed in 2012, we were driving back home and thinking, ‘how do we tell the kids’ – I’ve got three children. So when we got home we got the kids together and we said: ‘we can do this’ . And that’s the song really – it charts the course of our relationship over the years and the chorus is ‘we can do this’. So the song is a bit of fun in some places, and quite poignant in others.

“The other theme I wanted to explore was the changing relationship with my wife, from being my wife to being my carer, which is quite a tough thing.  With the best will in the world you marry and you say in sickness and in health but that doesn’t really prepare you for the level of care you’ve got to give someone in my position, so I think – it’s hard for me to say – but I think she’s an absolute star.”

While it is a very personal process, Ben gives every participant the option of sharing their song with the world – while some choose to keep theirs private, for themselves and their families, others have been happy to share them on the project’s website and on social media.

“Everyone’s got the choice, and I’ve been surprised so far how many people are happy to share them. A lot of people seem very proud of them, which is really nice. They kind of surprise themselves with what they produce. They start off saying: I’ve not done any writing, I’m not a creative person, or I can’t sing, I can’t do this and that, and by the end of the sessions they’ve got a recording of a song they’ve written, with them singing on it and they’re just so thrilled with it.

“But then I also understand that if people write something deeply personal and they don’t want to share it on the website, that’s completely fine as well and they can just have it for themselves and their family and friends,” says Ben.

Find out more about The Swansong Project here.