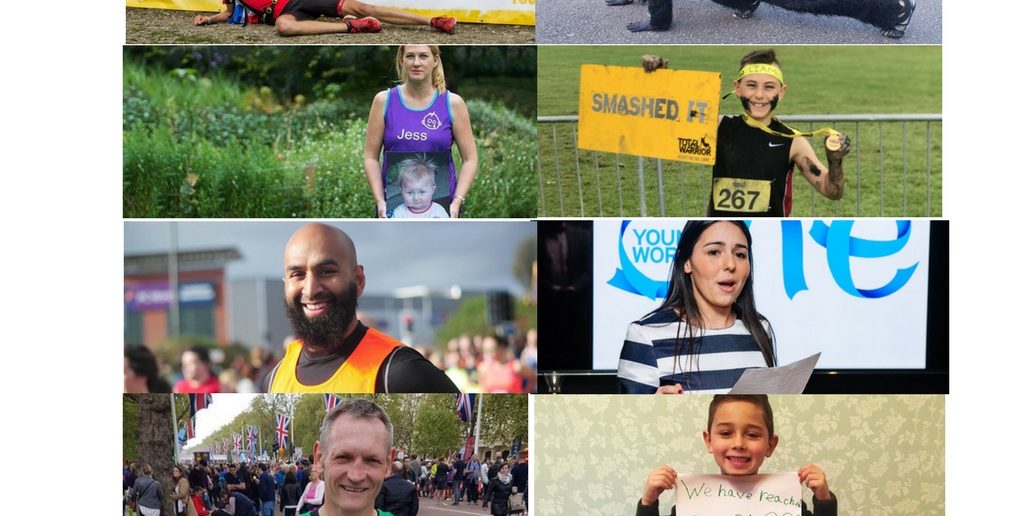 21 Selfless People Who Have Gone Above and Beyond in 2017

Throughout 2017 men, women and children of all ages have gone above and beyond to help others. From charity fundraising, to setting up awareness campaigns and supporting families facing illness or bereavement, people have shown incredible commitment to making a positive impact in 2017.

The JustGiving Awards are a way of congratulating all of the outstanding people, charities and teams who have taken on a challenge or made a change by fundraising.

This year saw a record number of nominations, with almost 31,000 people nominating fundraisers who they would love to see recognised. From the nominations, 21 people have been shortlisted into seven categories – from Endurance Fundraiser of the Year to Young Fundraiser, Celebrity Fundraiser and The JustGiving Life Changer Award.

21-year-old Alex has overcome anxiety, depression, low self-confidence, eating disorders, bullying, epilepsy and stammering to raise over £55,000 for charity. This year he took on his biggest challenge yet to help improve young people’s mental health and walked, cycled, ran and even kayaked over 4,000 miles around the UK, climbing to the highest point of all 100 counties.

Caroline was paralysed in a horse-riding accident in 2009 but, determined to not let her paralysis stop her, she took on the gruelling challenge of cycling from Lands End to John O’Groats, raising over £21,000 for Cancer Research UK.

After a long struggle with mental illness, Chris’ son Joe sadly took his own life last December at the age of 16. Chris created a beautiful book of photographs in his son’s memory that he uploaded to his JustGiving page. Joe’s family wanted to raise £16,000 – one thousand pounds for every year of his life. They’ve raised over £43,000 for Young Minds Trust, a charity committed to improving the mental health of children.

16-year-old Brooke has been a patient at Royal Manchester Children’s Hospital since the day she was born. At 11 days old she had lifesaving surgery to remove a pelvic tumour and since then she’s had more operations than birthdays. Last year, against medical advice, she completed the Manchester 10k with her surgeon by her side. This year, she recruited more than 70 people to run with her in Brooke’s Barmy Army, including a brass band, raising over £16,000 for the hospital.

This year, Tom (aka Mr Gorilla) became the first person to ever crawl the London marathon. He took six days to cover the full 26.2 miles, crawling for 10-12 hours every day. He’s raised over £40,000 to help The Gorilla Organisation save endangered gorillas from extinction.

John (aka the Gentleman Crafter) loves arts and crafts and has found it to be incredibly helpful when dealing with depression and anxiety. He has spent just over a year visiting the 92 historic counties in the UK to teach craft workshops. He has raised £23,000 and also shared the calming and beneficial properties of a creative hobby along the way.

Levi walked eight miles on Mount Toubkal in Morocco to raise money for Shuktara, a charity that provides a home for disabled children and young adults in Calcutta, raising more than £3,700.

10-year-old Liam was at the Manchester Arena with his mum, dad and sister when the terrorist attack happened in May. Since then, he’s been doing all he can to help the families affected by the attack. Liam took on at least one fundraising challenge every week throughout June and July. From fun runs, to tough mudders, to climbing Mount Snowdon, Liam dedicated his summer to raising money for the British Red Cross and the We Love Manchester appeal.

Andy is a Royal Navy Chief Petty Officer who set up Doing it for Heroes, a group of dedicated volunteers who have raised more than £500,000 for British service personnel wounded or injured in the line of duty. The group organises huge walking challenges as well as collections at sporting events.

Four-year-old George was diagnosed with cancer in January. Blown away by the dedicated staff at The Royal Marsden, his mum and dad started George and the Giant Pledge – pledging to raise £100,000 for children facing cancer. After smashing that target in just two weeks, they’ve inspired hundreds of people to join the pledge, raising over £430,000 in their quest to hit £1million.

Jessica’s one-year-old daughter Anna had a seizure out of the blue and was taken into intensive care. She sadly died just over 10 weeks later from a rare mitochondrial disease that has no cure. Jessica set up The Anna Lewis Brighter Future Fund, raising £290,000 for a research group at Great Ormond Street Hospital who are working to identify causes and potential treatments.

After surviving an abusive relationship, Esther vowed to help women in similar circumstances to get back up on their feet and stand tall again. She started crowdfunding to set up sTandTall, an organisation that helps woman and girls get access to the support they need quickly and anonymously.

Running the London marathon in 2012 was supposed to be a one off for Haroon. But after his father was killed in a car accident, he dedicated to doing something positive in his memory and ran four marathons in three weeks. He aimed to raise £20,000 to build a Solar Water & Power Centre in Gambia and smashed his target, raising £28,000, and the centre is now being constructed and will change hundreds of lives.

Sal is part of SAND (Safe Ageing No Discrimination), which aims to improve the experience of older LGBT people accessing health & social care in Shropshire. Sal raised money to organise Shrewsbury’s 2017 Festival of LGBT History, which brings together all sections of the community to hear hidden stories from LGBT lives.

Luke launched #itsokaytotalk after his brother-in-law, Andy, committed suicide in 2016. He wanted to create a safe space where men could speak without fear of being judged. When the #itsokaytotalk selfie campaign took off on social media, Luke realised that this was a big problem nationally.

10-year-old Ben’s autism makes it difficult for him to make friends. After he was left devastated when nobody showed up to his last birthday party, Vicki decided to crowdfund to give Ben the best birthday ever. Not only did Vicki raise enough money to buy him an iPad and sensory equipment for his bedroom, Ben received tens of thousands of cards from people all over the world.

Lakshmi’s nine-year-old daughter Nainika died in May as a result of anaphylaxis after she had an unexpected allergic reaction to eating a blackberry. Lakshmi has raised over £14,000 to set up the Nainika Tikoo Memorial Foundation to raise awareness of the severity of allergies and support research into allergy care.

Denise’s close friend Nicki died in August last year, only 15 months after being diagnosed with a terminal brain tumour. To raise money in Nicki’s memory Denise led a team of celebrities including Kate Thornton and Michelle Heaton on a 187-mile bike ride across Kerala in India.

Football presenter Jeff Stelling’s March for Men saw him walk 15 marathons in 15 days, visiting 40 football clubs and encouraging hundreds of people to join him along the way. It was Jeff’s second year of marching to beat prostate cancer. He’s raised over £700,000 to help Prostate Cancer UK fight for better diagnosis, better treatment and better support.

After the attack at Manchester Arena, actor Tom Hardy set up a JustGiving page for the victims. The following month, Tom started fundraising again following the Grenfell fire disaster, saying “As a Londoner and as a human being, it is impossible to be unaffected by the harrowing, unnecessary loss of life, injury and sorrow.” Tom raised over £56,000 for the Kensington & Chelsea Foundation’s appeal.

To view the shortlist and vote for your favourite fundraiser, click here and select a finalist from each of the seven categories. Voting closes on Thursday 12 October.