The Banded Hare-wallaby, an endangered kangaroo species, has made a historic return to mainland Australia, more than 100 years after the last wild colony disappeared as a result of foxes and cats.

60 Banded Hare-wallabies – 27 males and 33 females – have been successfully translocated to Australian Wildlife Conservancy’s (AWC) Mt Gibson Wildlife Sanctuary, where they have been released into a 7,800 hectare feral predator-free area.

The animals were airlifted from Bernier and Dorre Islands in Shark Bay as part of a joint operation involving field staff from AWC and the Department of Biodiversity, Conservation and Attractions. 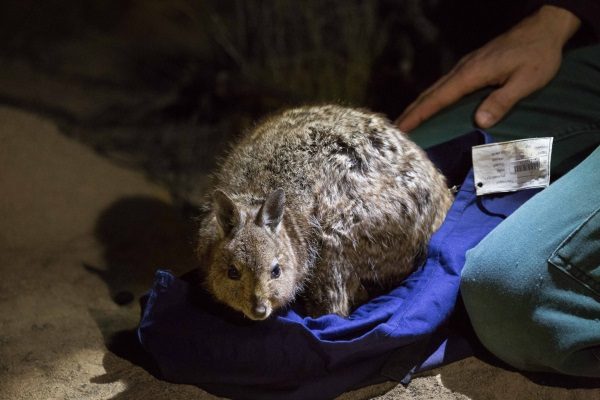 The Banded Hare-wallaby is the sole survivor of a now extinct group of mostly megafauna kangaroos; it is genetically and morphologically distinct from all living kangaroo species. Once found from near the Victoria/SA border to southwestern Australia, the last wild one on the mainland was recorded in 1906, highlighting the significance of its return to Mt Gibson.

The Banded Hare-wallaby is so vulnerable to cats and foxes that it survives only in feral predator-free areas. The survival and recovery of the Hare-wallaby – and several other threatened mammals – depends entirely on the establishment of large feral cat and fox-free areas such as at Mt Gibson (which is the largest cat-free area on mainland WA).

The Mt Gibson population of the Hare-wallaby is expected to grow to ~3,000 animals over the next decade, making it the first self-sustaining wild population on mainland Australia for more than a century. The two remaining wild populations (totalling ~5,500 animals) are on Bernier and Dorre Islands. A reintroduced population has been established on AWC’s Faure Island since 2004. A small number of individuals have recently been translocated to Dirk Hartog Island and a fenced sanctuary.

The translocation was a complex logistical exercise. AWC’s dedicated staff were based on a boat in Shark Bay, making nightly forays onto Bernier and Dorre islands to net Banded Hare-wallabies. Animals that were caught, and which met prerequisites in relation to age and health, were transported at first light by helicopter to the mainland, before being flown in a fixed wing plane to Mt Gibson and released after dark into their new, cat-free home.

Daily monitoring has revealed an exceptionally high survival rate – 98% so far. You can watch a short video of this historic translocation here: