Homeless Museum gives a voice to hidden stories of homelessness

By Alice Clarke on November 24, 2017 0 Comments
Photo: Museum of Homelessness

Homelessness can be an isolating experience, and one which is little understood. As its core mission, the Museum of Homelessness (MoH) aims to go some way towards rectifying this situation, seeking to promote social inclusion and an understanding of homelessness by acknowledging its hidden histories, usually underrepresented or ignored in conventional museums.

Behind the creation of this Museum lies the shocking fact that homelessness has more than doubled since 2010, due, in part, to callous policies which punish rather than support vulnerable individuals, inspiring the founding of MoH by Jess and Matt Turtle in 2014.

At the heart of its work is the Museum’s goal of creating a space where marginalised people are not only represented and included, but also have the opportunity to shape a new museum amplifying their own, often unheard, personal narratives. Rather than taking, curating and re-packaging their experiences to fit a pre-existing artistic agenda or cultural current, since its inception MoH has involved those who have lived experience of homelessness every step of the way, with no decisions being taken without them.

In April of this year, MoH launched its “State of the Nation” programme – a year-long exploration of the homelessness crisis gripping the UK – as a direct response to the wishes of people who have experienced homelessness and who are homeless. At the two-day opening event at the Tate Modern in London, which was attended by over 1,629 people, MoH sought to make sure that the activities directly expressed the experiences and emotions of those whose lives have involved homelessness, recognising that homelessness is a human story as much as a societal one.

Because of this, the MoH team worked to create ‘Exchanges’, rather than exhibitions of homelessness, which – part installation and part story-telling space – displayed objects and stories offering a snapshot of the lives of those affected by homelessness all over the UK. Objects were donated from a wide range of sources including homelessness workers and volunteers, activists, and people experiencing various forms of homelessness, and, rather than using traditional museum labels, MoH accompanied them with testimonies performed by actors, hoping to bring the complex stories and lives they represent to life.

One story that was explored in an Exchange was the story of the bed. 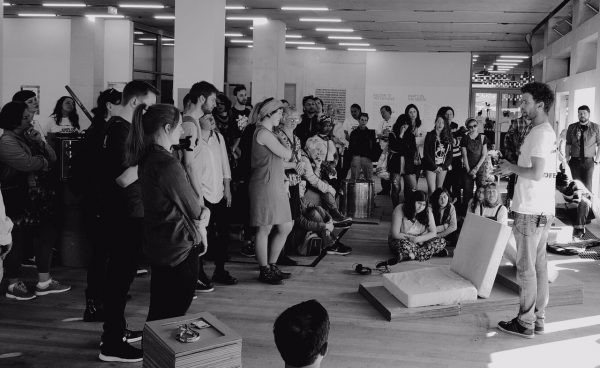 State of the Nation ‘Bed’. Photo: Museum of Homelessness

The object was donated by a worker at a winter shelter, who explained its significance:

“We tend to think of poverty in a material sense, but relational poverty is probably much more important… This work is about bringing people back to wholeness and recognising ourselves as whole human beings”.

Associated with permanence, safety, security, warmth and love, the story of the bed aimed to make its audience think about childhood, being cared for and feeling safe. By using objects such as the bed, which symbolise connection – and, at the opposite pole, loneliness – the Museum highlights a universal need that we all have to feel safe, sleep well, and be close to others, drawing attention to the real, emotional stories of those experiencing homelessness.

By using art, performances and installations such as these as a means of illuminating how policies, history, cultural values, and public assumptions have shaped homelessness, MoH works to bring to light the systemic causes of homelessness and broaden an understanding of the impact it has on countless lives.

Recently the Museum’s work has focussed on shedding light on homelessness in the present through exploring its history: much of the way the history of homelessness has been treated in the past is to consider it under the umbrella of another history, such as the history of social policy, welfare, migration or labour. According to MoH, because homelessness has not been broadly acknowledged as having a history in its own right, huge tracts of social and oral history have not been investigated, and particular perspectives on history have been left out.

That’s why the Museum is working to draw attention to objects, archival records and writings from the past and present, not just to help develop a deeper public understanding of homelessness, but also to uncover little-known aspects of homeless culture. Running against the common narrative surrounding homelessness which rarely acknowledges the individual stories of those living through it, the Museum provides a platform for promoting stories of supportive and compassionate relationships, political engagement and activism, individual talents in storytelling, performance and creativity, and artworks or objects that bring these voices and stories to life.

Through this, MoH helps to develop a deeper empathy for and connection with these individuals who are so often ignored and excluded.

MoH will be taking its State of the Nation programme to the Tate Liverpool between the 22nd and 28th January next year.

– This article is written by Alice Clarke, Donna Hayter and Matt Turtle