The Power of Art: Woman Overjoyed to Use Touch to ‘See’ Painting

An art-loving woman with restricted sight was overjoyed to use touch to ‘see’ a painting by a Saatchi-shortlisted Dorset artist at a conservation charity’s auction at the Cutty Sark in London.

Disability is not inability. In a cultural context, the essence of the statement is to express that people living with disabilities have the same rights and should access the same opportunities as their able bodied counterparts in the enjoyment of the creative and cultural life of their communities.

Art and culture are convenient enablers of social capital, vis a vis, the quest to foster social integration using a people’s language and cultural values. Sustainable community integration should be all inclusive and thus the active participation of people living with disabilities is paramount.

The story of Sandi Johnson has reignited conversations on how creators and distributors of cultural content can play an active role in facilitating the participation of the visually impaired. 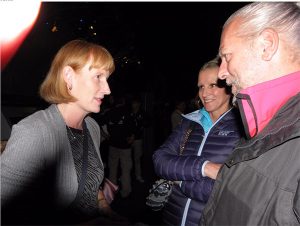 Sandi Johnson, who had begun to lose her sight aged 12, no longer has central vision and her peripheral vision has also deteriorated. She told Artist Geoff Francis, who donated four pieces to the Sea Shepherd charity’s auction at their 40th Anniversary Gala event, that she loved art but could not see it without an extremely strong magnifying device and then only rarely, since most art was behind glass.

Geoff invited Sandi to run her hands across the canvas of his sculptural painting Hidden Deep. The painting was created as an environmental statement about the dark deeds of humanity, hidden in the oceans, about which Sea Shepherd inspiringly and bravely raise awareness. Sandi tearfully exclaimed, “I have never experienced art like this.”

Hidden Deep sold immediately at the auction, with Sea Shepherded raising £860 at the auction from all the four art works. When the purchasers Vanessa and Nick Warwick learned of Sandi’s experience, they decided they wanted to give the painting to her. Sandi was shocked and speechless as tears trickled down her face. Over an hour later, she was still shaking.

Nick Warwick later told Sandi, who has put the painting up in her kitchen, “The painting was, as I learned, always yours, only you could appreciate it by feel as much as we did by sight – it would be wrong to have kept it, as much as we liked it. It makes us so happy that you have it in pride and place and we will never forget that.”

Sandi runs her hands over the contours of the painting every day. Her hands still shake with the experience. “I can’t really put into words how overwhelmed I was by [Nick and Vanessa’s] generous gift.”

Artist Geoff Francis, who is also a co-founder of the environmental charity No More Dodos, says that everyone who hears Sandi’s story feels moved. “This really shows how the power of art can reach everyone. I have never heard a better justification of thirty years of my work as an artist than in Sandi’s words. This experience has inspired me to make my work even more accessible to those who necessarily rely on other senses and might sometimes be excluded from the transformations that art can bring.”

Sandi’s story brings to the fore conversations that practitioners in the creative value chain need to have in order to strengthen active and meaningful participation of people living with disabilities in the creative and cultural life of their communities.