Jane Bruce, a donkey welfare adviser with The Donkey Sanctuary, Ireland was recently working in the Galway region when she came across a shocking sight.

As Jane was crossing an expansive bog field, she came across a little donkey foal stuck in a deep section of bog. 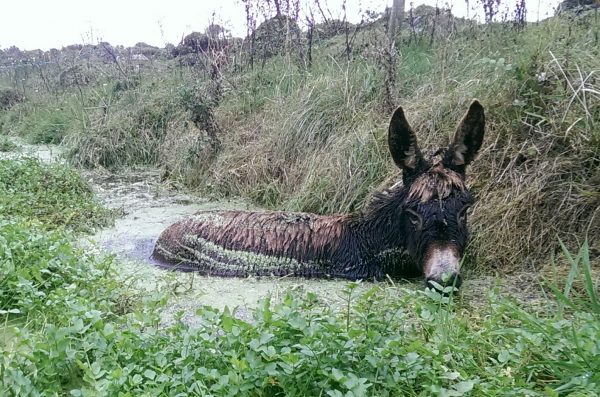 Roma in the bog

“I could hardly believe my eyes. The foal’s body was trembling from the cold water. She was clearly in distress and it was impossible to know how long she had been there, waiting for help,” Jane describes.

Lonely, afraid, hungry and cold the foal had been abandoned to the elements.

Without hesitation, Jane quickly made some calls for help. Two Gardai arrived to help. Jane remembers, “I managed to get a head collar on the foal. The Gardai pulled and I pushed and together we heaved the foal out of the bog and onto the bank.”

The foal was completely exhausted after her ordeal and could not stop trembling. Forgotten Horses Ireland arrived with a trailer and the little foal was lifted into the trailer with support straps to aid her weak body.

With no time to be lost, the foal was taken straight to a local vet where she was treated for hypothermia and shock.

The vet concluded that the foal was very lucky that we found her in time.

A few days later the foal was named Roma. She was collected from Forgotten Horses Ireland and taken to The Donkey Sanctuary in Liscarroll, Co. Cork.

Roma has settled in very well to her new home where she will always receive the love, care and attention that she deserves.