Social Media Can Be Used For Good: Teen Cancer Survivor Thanks YouTuber Community For its Support

Over a third of Britons deem social media as not being good for society, according to a recent survey, but Tyler Hart is not one of them.

The 14-year-old from Chelmsford watched YouTube videos in his hospital bed, and later got to meet some of his online heroes.

He is now sharing his story to thank them and the wider YouTube community for their support which ‘boosted his spirit’ during his cancer treatment.

Tyler was diagnosed with Non-Hodgkin’s lymphoma (Burkitts lymphoma) in July 2016 after experiencing severe stomach and back ache which doctors initially dismissed as constipation or growing pains. It was even suggested by doctors that Tyler was making it up to miss school.

After several trips to the doctor and even emergency trips to A&E because his pain was so severe, Tyler eventually received the shock diagnosis.

Tyler’s mum, Sue Hart, said, “I trusted the doctors that they were right and just believed what they said. They were saying there was nothing wrong with him and maybe it was just Tyler didn’t want to go school. There was a suspicion he was making it up so I had to force him to go to school.

“When we were told it was cancer, I was devastated, I just couldn’t believe it. I felt guilty because I didn’t believe him all those times. Hearing the words cancer was the last thing I expected. The memories are hazy because I think we were in shock.”

Tyler underwent six intensive courses of chemotherapy which caused a lot of physical, as well as emotional side effects for the teenager. Research from CLIC Sargent, the UK’s leading cancer charity for children and young people, found 79% of young people felt cancer had a serious impact on their emotional wellbeing, 70% experienced depression during their cancer treatment and 83% of young people experienced loneliness during their cancer treatment.

For Tyler, YouTube and the people he met through it played a big part in keeping his spirits up. 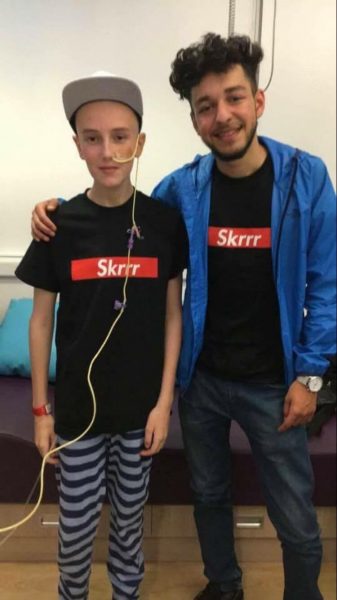 During his cancer treatment, Tyler built an unlikely friendship with Masieh Zarrien (aka Masieh) and Shah Faisal Shinwari (aka Carnage), who came to visit him in hospital. Masieh later posted a video of the visit on his YouTube channel calling it ‘the most humbling experience of my life’.

Tyler also met the YouTube ‘Sidemen crew’ as a football mascot in a charity football match meeting stars like KSI, Marcus Butler and Callux who have fans in the millions.

“It was a really difficult time but watching my favourite YouTubers helped to keep my mind off things and make me feel less isolated. The comments I got through YouTube were really supportive and it really boosted my spirits. I can’t say thanks enough for that,” said Tyler.

During his treatment in London, Tyler’s family also had support from a CLIC Sargent social worker who provide financial, emotional and practical support to children and young people with cancer.

Now Tyler and his family are supporting CLIC Sargent’s World Cancer Campaign where members of the public can donate £2 to get their own ‘Band Against Cancer’ wristband to raise vital funds and awareness.

Tyler said, “I’m really proud to back this campaign and wear my Band Against Cancer wristband because CLIC Sargent made such a difference to me and my family.  Buying a band and telling everyone about it is such an easy way to make sure other families get the same support I did.”

To find out more about World Cancer Day and to get your own Band Against Cancer wristband go to: www.clicsargent.org.uk/WorldCancerDay also available in JD Wetherspoon pubs, Morrisons, H Samuel and Ernest Jones stores.