Most people who donate blood do so maybe once or twice a year. Less than 10 percent of the population donates at all in a given year.

Hannaway recently reached a milestone. He’s now donated more than 100 gallons of blood in his lifetime.

OneBlood, a non-profit donation center, decided to honor his achievement. Volunteers at the organization have made contact with some of the people he’s helped through his donations and say he’s saved many lives.

How Does Donating Blood Save Lives?

Donating blood saves lives. Every two seconds, someone in the U.S. needs a blood transfusion because of sickle cell disease, cancer, other diseases and traumatic injuries. Americans need about 36,000 units of red blood cells, 7,000 units of platelets and 10,000 units of plasma every single day. There is a huge need for blood donations, and that’s why people like Mr. Hannaway are heroes.

Just one pint of blood can save up to three people’s lives. Hannaway has donated 100 gallons, or about 800 pints, of blood over the last 40 years. That means he has potentially saved as many as 2,400 lives just by donating blood.

How Does Donating Blood Work?

To donate blood, you have to be healthy and feeling well on the day of your donation. You have to be at least 17 years old in most states. Adults need to weight at least 110 pounds. When you get to the donation sites, the facilitators will make the final determination as to whether you can donate that day. 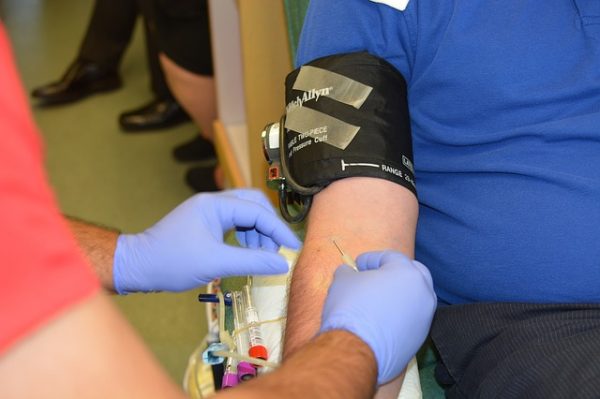 Blood donation doesn’t cost you a penny, but it can change the lives of so many people!

There are also various types of blood donations, including:

You can donate whole blood every 56 days, platelets every seven days, plasma every 28 days and power red every 112 days.

Do You Want to Donate More Blood?

By donating blood, you can save lives. If you want to be more like Mr. Hannaway and give more blood, try following these tips to help you stick with it.

If you know more about donating blood, you may be more likely to do it. Learn all you can about the benefits. Also, look into the donation process, especially if you get nervous about donating. The more you find out about it, the easier it will be to remember it’s a safe process and that you’re in good hands. Feel free to ask questions before and when you get to the donation site as well.

If you make something a habit, you’re more likely to continue doing it. Donate blood on a regular schedule as best you can. Mark on your calendar when you plan to donate, start looking for a donation event when it gets close to that date and then follow through. The more you do it, the easier it will get to stick with.

Mr. Hannaway told ABC News that he likes setting goals and that he set the goal of giving 100 gallons of blood around the time that he started donating. Establishing a clear benchmark for yourself can help motivate you to keep donating since you’ll be able to watch your progress as you get closer and closer to your goal.

It all started for Hannaway when he tagged along with a colleague to donate. From there, he just kept on doing it! Find a friend to go with you to donate, especially if you’re feeling nervous about it. If you can find a friend who will share your long-term donation goal with you, that’s even better! Try to pick the same donation dates and go together and always keep each other updated on your progress. When you hold each other accountable, you’ll both be more likely to reach your targets.

Though Hannaway wasn’t really looking for all of the attention that reaching the 100-gallon milestone brought him, he did say he hopes the story inspires more people to donate blood. And it should! It’s truly an inspiring story, and it shows how even a relatively simple act like regularly giving blood can save change, and save, so many lives.