Rescue Dog Gives Soldier With PTSD His Life Back

By Nisha Kotecha on February 19, 2018 0 Comments
Cassie helps Shaun have the confidence to leave the house and carry out everyday tasks

A homeless hound from Dogs Trust Manchester is transforming the life of a soldier with Post Traumatic Stress Disorder (PTSD).

Spaniel Cross Cassie arrived at the Denton-based rehoming centre early last year and Assistant Manager Rebecca Smith spotted that she had the qualities required to become an assistance dog.

“She was very people focused, confident and curious but also very gentle so when Service Dogs UK approached us, we introduced them to her and they agreed she could do really well, so off she went to begin her new adventure!” Rebecca explains.

After nine months of training alongside soldier Shaun Faulkner, Cassie has graduated as a PTSD Assistance Dog and is now by his side day and night. 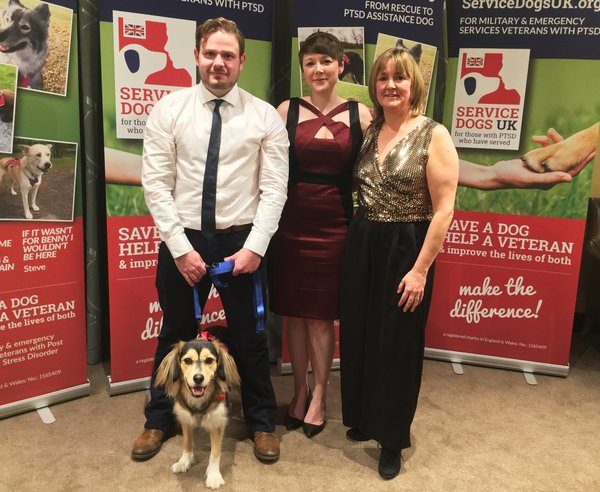 Shaun had always wanted to become a soldier and joined the army as a 16-year-old in 2003. Between 2006 and 2014 he did four tours of Iraq and Afghanistan, becoming a corporal in 2014. It was after completing those tours that he started to suffer nightmares, flashbacks and panic attacks from the rocket and mortar fire he had experienced.

On returning from Germany to the UK in 2015, Shaun was diagnosed with PTSD. As well as causing him distress, his symptoms meant he was missing out on family life with his wife, Carmen, and their four young children as he no longer wanted to leave the house.

Then he saw an advert for a new charity, Service Dogs UK.

“My symptoms were affecting me and my family every single day. I’d go to the supermarket and just stand there, forgetting what I was there for. I saw the advert and it really appealed to me as I’ve had dogs all my life. I am passionate about rescue dogs. It’s not their fault they are in the situation they are in, and that was the same for me,” Shaun said.

Service Dogs UK provides veterans from the British Armed Forces and emergency services suffering from PTSD with specially trained assistance dogs. The dogs are selected from rescue centres and partnered with veterans.

For Shaun and two-year-old Cassie it was a match made in heaven from the moment they met. 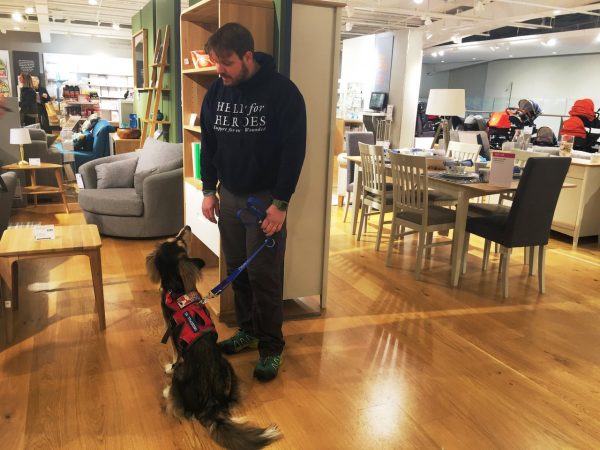 “It might sound like a cliché but it really was love at first sight. She jumped on my knee and started licking me. She has transformed my life and I can’t imagine life without her. She makes doing the ordinary, everyday things that were becoming impossible, possible. Without her I would be a recluse,” Shaun said.

Shaun is now happy to leave the house with Cassie by his side and is able to enjoy family life again. Cassie has been trained to respond to a medication alarm reminder and importantly she is there whenever Shaun is having a difficult time, day or night.

“She recognises when I’m anxious or upset and will come and sit by me or climb on my knee which snaps me out of it. She changes my focus and also gives me comfort.

“Every night she lies across my feet in bed which is very calming and has reduced the number of nightmares I have, but if I do have nightmares she licks my face and if that doesn’t work she will gently paw at my face until I wake up.

“When we’re out I call her my furry barrier! She stands behind me at cash machines and if I am in a supermarket her just being there helps prevent people crowding me which reduces my anxiety.”

Cassie is not just Shaun’s four-legged friend, she has settled into all the fun of family life.

A thankful Shaun says, “The kids love her and we have a great time going out together. She loves nothing more than splashing about in muddy puddles, but she senses when I need her and she’s always there, without fail.”