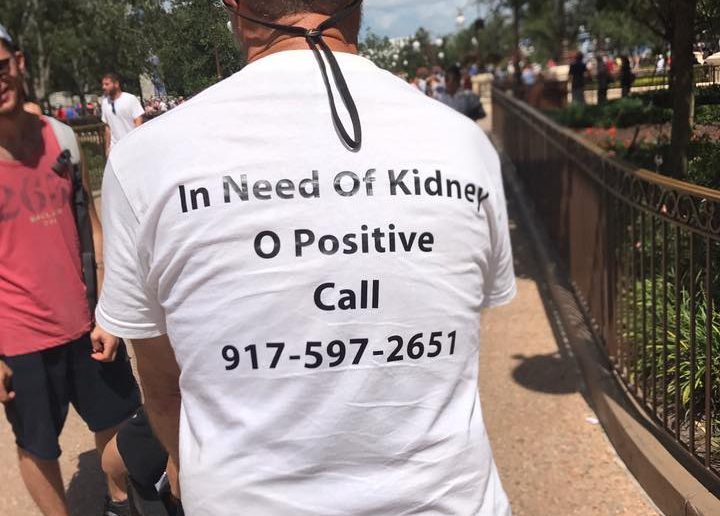 You might have seen the picture of his shirt making the rounds on Facebook. The back reads, “In Need of Kidney, O Positive” with a number to call. People may be quick to point out all the negatives of technology and social media, but it’s safe to say that this time, it helped to save a man’s life.

The shirt idea came about as a last resort. On dialysis for years, Rob Leibowitz was struggling to balance long, thrice-weekly dialysis treatments with working full time and taking care of his five children. He was also struggling with finding a donor, due to his blood type and his children being unable to donate for medical reasons. The waiting list he was on meant he wouldn’t get a kidney for seven to 10 years, a wait he didn’t think he would make.

Figuring Disney World was a pretty good place to get a lot of exposure, Rob wore the shirt to his Disney vacation with his kids, continuing to live life to the fullest during his wait for a donor. 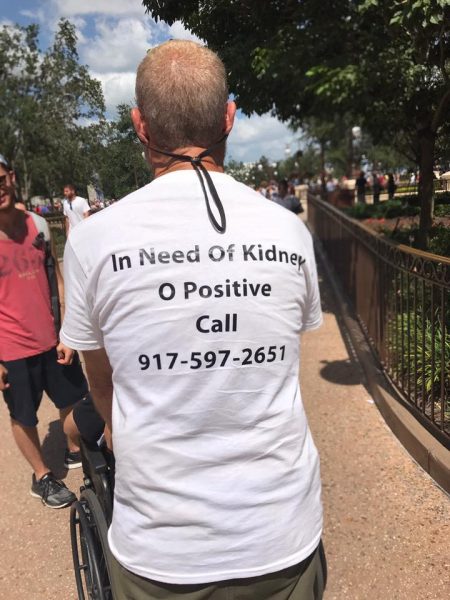 Someone took a picture of the back of his shirt (left), posted it on Facebook, and it was shared thousands of times within the first day.

The screening process for kidney donation is pretty extensive, involving both medical and psychological testing. Three donors made it through the initial testing, but it turned out none were a match.

However, Richie Sully then came in, and Rob finally got his match.

While many people might get caught up with the presumed difficulties of life without a kidney, Richie emphasized it wasn’t a huge deal. Life with one kidney isn’t really that much different than the life you were living before. There’s the healing period after the surgery, but other than that, it’s mainly just yearly checkups to ensure everything is still working the way it should be.

After a three-hour surgery and about a week in the hospital recovering, Rob was on his way to a longer, happier, healthier life thanks to Richie’s donation. While there are still steps to go through after the donation, it means no more dialysis treatments preventing Rob from spending the time he wants to with his children.

It’s uplifting to see stories like this, because we’re reminded how good people can be to one another. Multiple complete strangers were willing to go through rigorous testing to give their kidney to a man they had never met, and thousands shared a picture they could’ve just scrolled by.

Can you imagine how this would’ve played out in the pre-social media age? There’s no way the picture of his shirt would’ve gotten to thousands of people. And honestly, it probably wouldn’t have gotten to the man who ultimately ended up being Rob’s match. The power of social media and the Internet, in general, is something not to take lightly. But when we see things like this — where it’s being used to save a man’s life — it’s pretty amazing.

With the story being as widespread as this one is, one can only hope that its positivity and message will continue. With a simple t-shirt and a picture on Facebook. Rob got the kidney he’d been waiting four years for. Sometimes that’s all it takes to save a life. Or, at the very least, a positive story can be something that puts a smile on the faces of those who really needed to hear it — and that’s a beautiful thing.