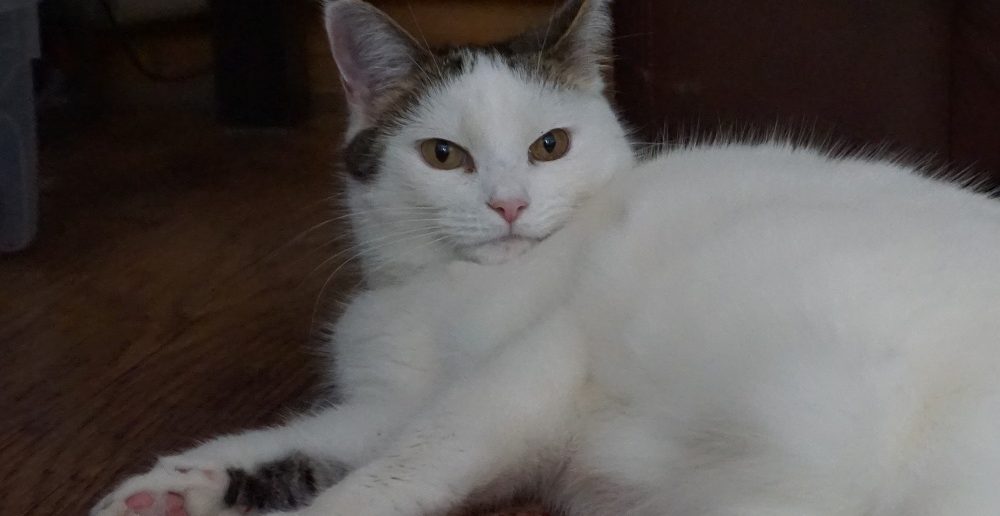 A rescue cat, who was diagnosed with feline asthma and has to use an inhaler, has now found a new home. 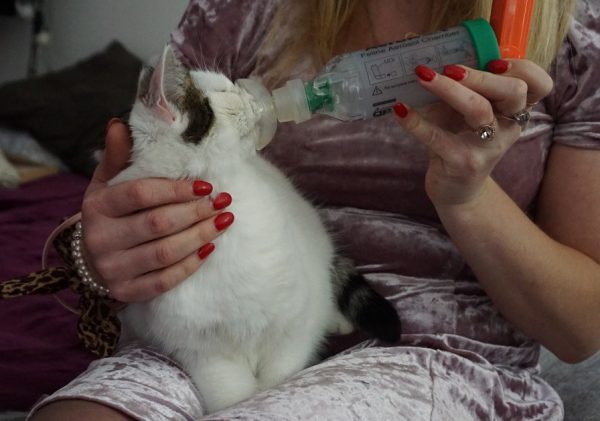 The two-year-old, named Alma, was taken into London-based animal welfare charity, Mayhew, after she was found abandoned on the streets of North West London.

Alma was quickly seen to by Mayhew’s Vet Team at their on-site Community Vet Clinic and was given a thorough health check.

“We discovered that Alma had scarring on her lungs, the legacy of a particularly nasty bout of cat flu she was suffering from when rescued,” Mayhew Vet, Dr Emma Robinson, said. “This caused her persistent bouts of coughing and we later diagnosed her with feline asthma.

“The most obvious symptom in an asthmatic cat is coughing. If your cat has feline asthma, you may also notice a change in breathing, especially around the same time as the coughing episodes.

“If your cat displays any of these symptoms, book an appointment with your vet. They will likely recommend your cat has an X-ray and may even undergo a procedure called a bronchial lavage (airway wash), where cells are collected from the airways for analysis. Sometimes a tiny camera is put down their throat to examine the cat’s airways in what’s known as a bronchoscopy. These procedures help to identify asthma, as well as ruling out other potential diagnoses, such as an infectious disease or cancer.

“After being diagnosed, symptomatic treatment with anti-inflammatory and/or bronchodilator drugs is then required. The former targets the inflammation of the airways, while the latter help relax the muscles surrounding the airways. Both types of medication can be administered in different ways – in tablet or liquid form, by injection or by inhalation. Inhalation is the preferred method of administering drugs for asthmatic cats, as it means the medication is delivered directly to the lungs where it is needed.

“Although it may sound unlikely, getting a cat to use an inhaler isn’t impossible, due to special ‘spacer’ devices. Metered dose inhalers, which look exactly like human ones, are fitted to one end of the spacer chamber, whilst a face mask at the other end covers the cat’s mouth and nose. Perhaps surprisingly, most cats can be trained to use the device without too much fuss. A good thing, as the inhaler may be required at least once a day to keep symptoms in check.

“Alma was such a fighter, we really wanted to give her the best chance that we possibly could, to get her better and into a loving forever home.”

As soon as Alma was ready and trained to use the inhaler, she was put up for adoption and soon found a new home to spend the rest of her years in.

“I’d never met a cat with asthma before. In fact, like many pet owners and members of the general public, I didn’t even know a cat could get asthma, let alone use an inhaler like a pro,” Alma’s new owner, Alice Hudson, said. “When she first came to live with me, she took an inhaler twice a day. Helpful staff at Mayhew were able to show me how to administer it, and I was surprised at how well trained and co-operative she was.” 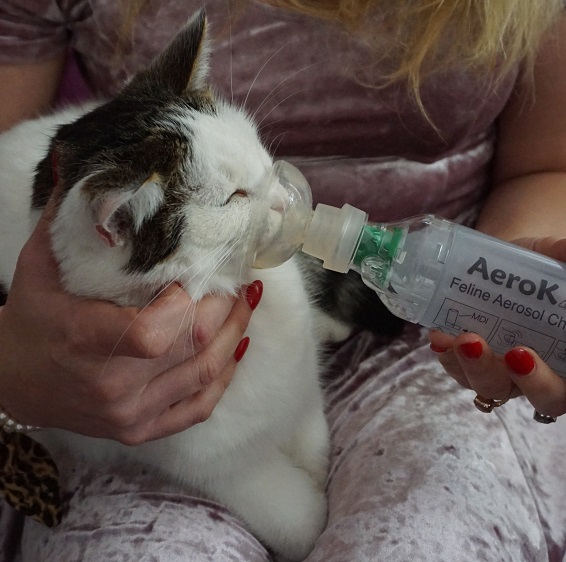 Alma has been well trained to use her inhaler

“Alma may be asthmatic, but that doesn’t stop her running around like a mad thing – chasing the cat laser light is among her favourite activities,” Alice continued. “My little princess leads a perfectly healthy, normal life and if all that purring is anything to go by, she is one content kitty.”

If you are interested in adopting any other cats in Mayhew’s care, please visit www.themayhew.org or call 020 8962 8000.