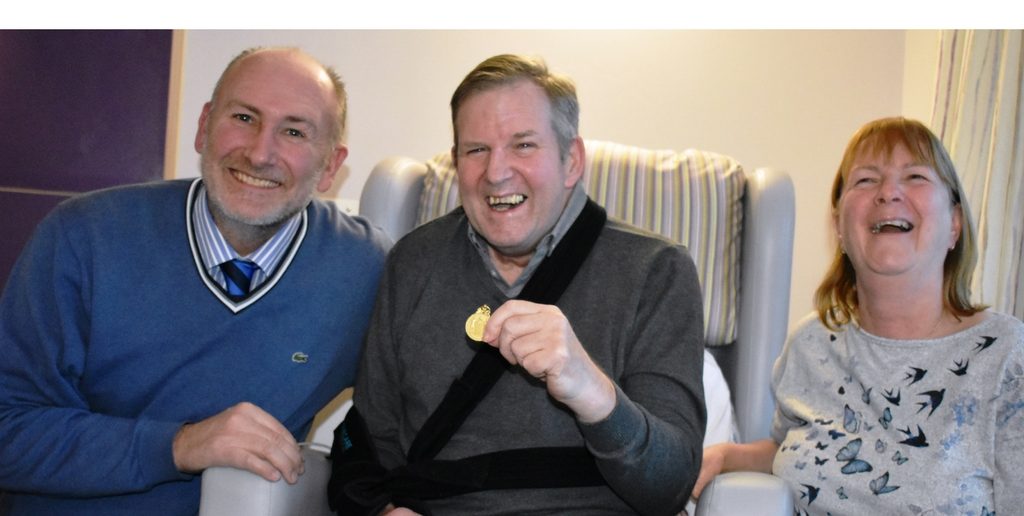 A patient from St Andrew’s Hospice has ticked something off his bucket list after a former Coventry City and Grimsby Town player and manager came to visit him in the hospice.

Glenn Beedie, originally from Grimsby, is a dedicated football fan and has always dreamt of holding an FA Cup Winners Medal. 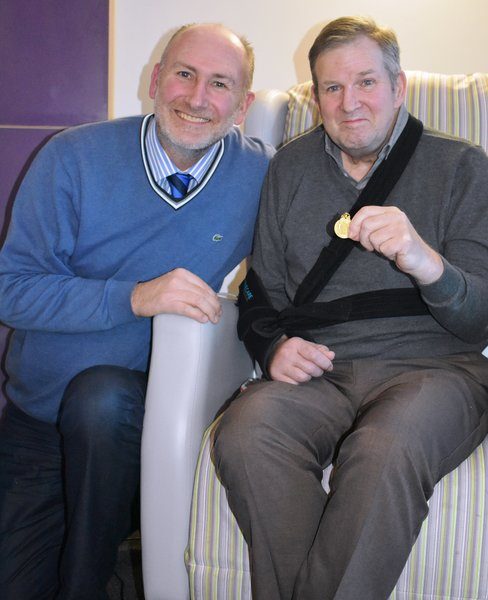 His dream came true when Graham Rodger, who won the trophy while playing for Coventry City in 1987, visited him and brought his medal along.

“I was only 20 when I won the cup, at the time I was one of the youngest players to ever win it. It was the highlight of my career and I was then fortunate enough to go on and have some great times with Grimsby,” Graham recalled. “It’s surprising, but not many people ask about my cup final appearance, I think because it came so early in my career. But I was delighted to come to the hospice and share my memories with Glenn – it is important as players and ex-players that we give something back to the fans that have supported us.”

Football has always played a big part in Glenn’s and his wife Lillian’s lives. Both
are avid football fans and they have met at a football game.

“We got engaged at Hull City when Fulham were playing there and then we went down to Fulham when we got married,” said Lillian. “We were lucky enough to get a tour of the ground (Craven Cottage) from the chairman – it was a great experience.”

Their families continue to support the Mariners, and their grandson is currently studying at the Grimsby Town Academy.

Glenn, who uses an iPad to communicate, told Graham about one of his favourite Grimsby Town players, Jim Dobbin. They spoke about remarkable matches and players and Graham was able to share personal
stories with Glenn.

Holding an FA Cup Winners’ Medal was a special moment for Glenn and combined with the
opportunity to discuss his favourite sport with a football legend, made him very happy.

“My illness may end up taking my life but it will never take away my memories,” Glenn said. “Holding an FA Cup Winners’ Medal was one of my life’s dreams and now that is complete – thank you to Graham and the hospice for making this possible.”

St Andrew Hospice is a hospice based in Grimsby, which provides free care of everyone over
18 with a wide range of progressive life-limiting conditions. Find out more about their work here.