When post by the sack load starts to arrive at a children’s hospice in Didsbury, Manchester in the run up to Easter, everyone knows what is inside.

From across the UK and the globe, the word has spread among the knitting community, that Francis House Children’s Hospice needs their support for one of their biggest fundraising appeals. 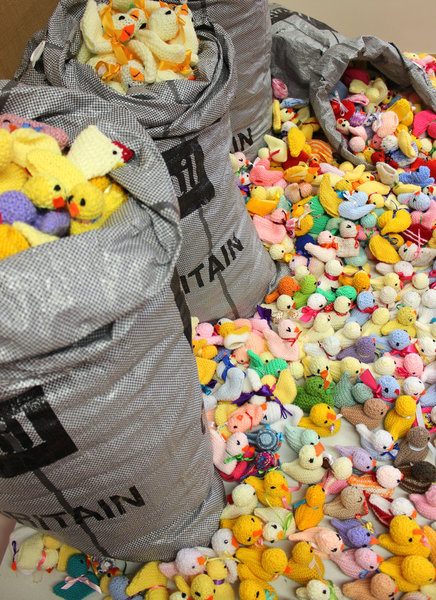 Last year the Easter chick knit resulted in an incredible 40,000 crocheted and knitted chicks descending into the Manchester hospice that provides a home from home environment to the families of children with life-limiting conditions.

Each woolly creation is filled with a small chocolate egg, donated in their tens of thousands by schools, supermarkets and local businesses, and the cute chicks are sold across the region for £1.

This year’s appeal is on target to match the previous total of £50,000 raised in income.

More than 740 knitters have taken part, including groups of knitters and crafters.

A knitter in Western Australia however pipped them at the post by producing 1,084. Laure Chambers, 80, originally from Hulme, knits while watching football, cricket and athletics on TV at her home in Perth.

After travelling more than 9,000 miles in the post, Laure’s sisters-in-law Lillian Haughton and Jennifer Walker, both from Cheadle Hulme, finish off the chicks with stuffing, beaks, eyes and bows before taking them to Francis House.

For every chick knitted a Cadbury creme sized egg is needed to fill it. Manchester businesses backing the campaign include Fashion retailer Boohoo, Co-op Heaton Moor Road, Stockport’s Allied Bakeries, Town Barber Too in Oldham, and the Girls’ Division of The King’s School in Macclesfield.

Denton-based Francis Kirk Group, manufacturers of engineering and fastener products, loaned a driver and van to deliver two thousands chicks to be sold in six schools in Stockport.

The money raised will help towards the long term running costs of the hospice.

“It takes time to send out knitting patterns, organise egg stuffing sessions and volunteer deliveries for thousands of chicks, but the results are always fantastic. We are really grateful to everyone who gets involved and on behalf of Francis House and the 1,200 families we support I would like to say a huge thank you,” said Rachel Astill, fundraising officer at Francis House.

For anyone wanting to find out more about Francis House, there is a public open day at the hospice on Monday April 23. Please call 0161 443 2200 for more information.