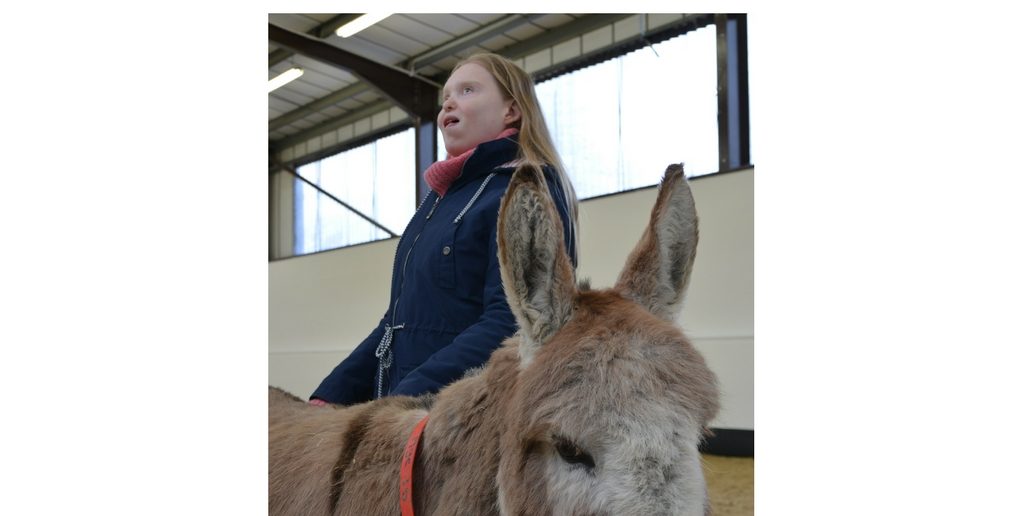 By Nisha Kotecha on April 2, 2018 0 Comments
Photo: The Donkey Sanctuary

Emily is autistic and has very limited vision and hearing, making communication difficult for her, but The Donkey Sanctuary and a miniature donkey named Juniper have helped her make a connection with the world around her.

23 year old Emily from Devon often struggles to control her emotions and can at times become very distressed and confused, but since going to The Donkey Sanctuary, Emily has learnt that donkeys are more than just adorably long ears, soft furry noses and charming characters. 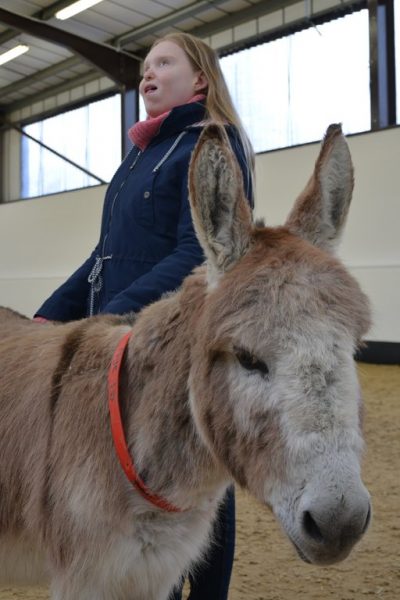 Donkeys can help with the development of critical life skills, such as managing emotions in vulnerable children and adults.

The Donkey Sanctuary has six centres around the UK offering Donkey-Facilitated Learning sessions. The sessions use a calm and mindful approach to bring people and donkeys together, and provide opportunities for emotional connection, social interaction, communication and confidence building.

Emily had a particularly difficult year in 2017, after badly damaging her leg in an accident.

Confined to a wheelchair whilst her leg was healing, she became very withdrawn and frustrated, and found it difficult to understand what was going on.

When she first attended The Donkey Sanctuary to take part in the interaction sessions, Emily wasn’t interested and was incredibly anxious.

“The staff and donkeys were patient and understanding, and gradually Emily started to feel more positive and engaged with the activities,” Melissa, Emily’s mum commented. “Her sessions with Juniper helped her to relax, and she enjoyed being by his side touching his coat, brushing his tail, and just his presence alone was calming and Emily seemed to mirror this. After her accident, when she needed to build up her strength and confidence, Juniper helped her recovery as she was motivated to walk with him around the arena.”

Melissa is thrilled to have notice some positive changes in her daughter. “Emily was so locked in before we started, and being close to the donkeys really tunes her into herself and the world around her.” Melissa said. “She is always calm and grounded, and after her visits the positive effects can last for days. She is ‘feeling’ her emotions more now, and starting to understand them.”

Emily has formed a special bond and friendship with miniature donkey Juniper. Emily giggles and talks to him, always saying ‘goodbye Juniper’ at the end of the session. Mum Melissa says that this has really helped with her communication and she now even interacts with her pet dogs at home, whereas before she wouldn’t.

“As social creatures, donkeys are very aware of their environment and the people within it.” said Caron Whaley, Director of donkey-assisted therapy at The Donkey Sanctuary. “I have witnessed sessions where people that may struggle to communicate or connect emotionally with another human somehow seem to be able to connect with our donkeys.”

Juniper benefits from time spent with Emily and their interaction too. It keeps him active and enriches his life by stimulating his mind. During the sessions Juniper has a free rein and it’s his choice to approach Emily and spend time with her, or to move away if he wishes.

When Juniper is with Emily, he shows signs of relaxation and curiosity.

Like all donkeys, Juniper is very intelligent, and the mental stimulation which comes with interacting with new people and new experiences makes his life more enriching.

The gentle movement that Juniper undertakes in these sessions also helps him physically as he has mild arthritis, which is managed with medication, but helped by keeping him active.