Lives of 5000 Children and their Families Improved through Volunteer Support

Good parenting is at the heart of children’s wellbeing and development. When a parent’s own wellbeing is poor then they can struggle to care for their children. When parents are unwell or unable to cope, children often suffer.

“The increase in children becoming ‘looked after’ is recognised as a growing crisis by many in the care sector. It’s generally agreed that some urgent action must be taken,” said Keith Danby, Chief Executive of Safe Families for Children.  “We believe that volunteer support from the community can go a long way to stabilising family situations in times of acute stress or dysfunction. We’ve seen so many families benefit from having community support and respite when they are at their wits end.”

Many mothers have felt that moment of panic when they look around and their toddler is nowhere to be seen, having escaped and fled in nappies to explore new places.

Sarah Owens, a mum of two, felt that rising panic when her daughter Isabelle slipped unseen out of the gate one day. “There was no lock on the gate at the time,” explained Sarah. “Just string holding it shut and I must have forgotten to tie it.”

Running in search of the toddler, Sarah found her nearby in the neighbourhood. A woman watching the scene unfold reported Sarah. Social services got involved and put Sarah in touch with Safe Families for Children.

After that traumatic day Sarah began to suffer depression and to have breakdowns.

“It was my brain, it was so full I couldn’t get anything else in…like muddy water. I couldn’t think to even see how I felt. My head was overcrowded.”

Safe Families for Children aims to prevent children from needlessly having to go into the care system. They have been working with local authorities in England since 2013.

Children and their parents/carers are supported by volunteers from the local community who have been recruited and trained by the charity.

For Sarah, the support of the charity has had an incredible impact. A volunteer Family Friend for the children was matched with the family so Sarah could have a bit of a break every fortnight and then the charity sourced a volunteer to support Sarah, to go have a cup of coffee and chat while the kids were doing soft play. 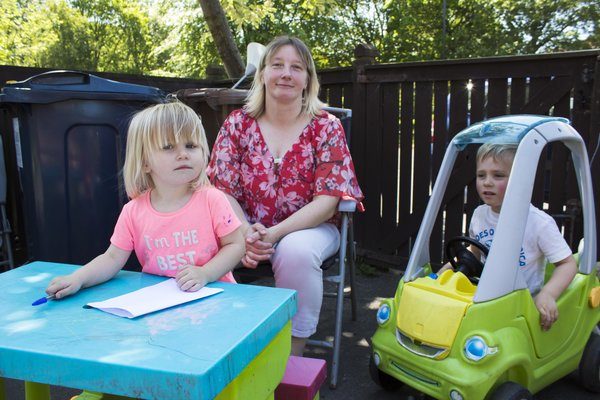 The volunteer and Safe Families staff also encouraged Sarah to go to the doctor’s and get some counselling, which she did.

“I’m completely different now,” says Sarah. “I feel like my old self’s back. I remember going into work not long ago and saying to this lad who is a good friend, ‘Eee, I feel like the old me’s back’.

“It just gives you a break from the monotony of your routine, I suppose. It’s somebody to talk to. I haven’t met all the volunteers but I assume they’re the same. You’re not getting judged and they’re sitting there letting you waffle away. It gives you that bit of rest to fight another day.”

Safe Families for Children have already arranged volunteer support to improve the lives of 5000 children across England.

Amongst other benefits, volunteer support has been found to improve positive parenting.

Chief Executive of the charity, Keith Danby said: “The difference that can be made in the life of a child is always motivating,” said Keith Danby, CEO of Safe Families for Children. “What we do is simple, just people helping people, but early intervention is key to helping families and preventing situations from escalating to such a point that a child has to be taken into care.”