Like many in the city of Brooklyn, blogger and producer Amanda Needham relied on her bike to commute to work each day. That is, until a couple of weeks ago. She left her apartment, fully intending to spot her bike locked up safely on the way out, but she didn’t. It had been swiped in the night, wheeled off by a nameless and faceless crook. But that’s actually where her surprisingly uplifting story begins.

Amanda was used to securing her bike before heading upstairs to her Brooklyn apartment, but for some reason that Saturday night, she and her husband neglected to lock it up tightly enough. They locked the front wheel in place but left the back tire spinning. When she returned, the front wheel was all that was left.

It wasn’t the first bike theft in her neighborhood, so although it wasn’t necessarily a surprise, it certainly was disheartening. Especially since Amanda couldn’t afford a new mode of transportation.

Many would have accepted the situation and moved on, but Amanda didn’t feel right not calling attention to the theft problem in her neighborhood. So instead, she made a huge sign directed at the thief and displayed it along the sidewalk outside of her home. 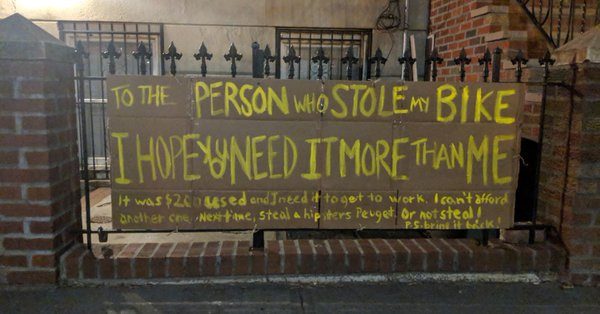 The sign laid out how she used the bike to get to work, that she couldn’t afford another and that she’d appreciate it if the person responsible would return the bike.

First, it was two young men ringing her doorbell. They had an extra bike and thought she might be able to use it — Amanda graciously accepted the bike. Then, it was a middle-aged woman offering to help any way she could, including paying for Amanda’s CitiBike subscription. And finally, someone offered to pay $200 in exchange for her sign — the exact amount she had paid for the bike!

Armed with enough money to buy a new cycle comparable to the one she’d lost, Amanda decided to pay it forward with the bike the two young men had generously donated to her cause. She headed down the street to a locally owned bike shop and struck a deal with the owner — if the owner fixed up the bike and raffled it off, Amanda would help boost the shop’s social media presence. So, the #KarmaCycle was born, and a revamped bike was displayed on the street with its own sign to bring in business until it was donated.

If there’s one thing you can take away from Amanda’s story, it’s that you should never be afraid to open yourself up to the beautiful possibilities of the universe. Biking is a much more common mode of transportation for those living in the city, so Amanda may have potentially opened a world of business opportunity for the local bike shop owner, just by reaching out with her unique story and getting a social media campaign going. In the competitive landscape of the city, this can have a bigger impact on a small business than many may realize. So because of a few good Samaritans, Amanda was helped, but also managed to help someone else, and potentially others down the line as a result. It truly is a cycle of good karma.

Amanda admits that she felt a little sheepish about leaving the sign on the sidewalk for a full week, but after receiving such heartwarming responses from neighbors, she realized it was worth putting herself out there for the sake of encouraging others to exhibit kindness.

In a way, the stolen bike was actually a stroke of good luck.