By Nisha Kotecha on April 6, 2018 0 Comments
Photo: Julia Gunther/Light for the World

There are 2.25 million people internally displaced in South Sudan. In 2014, the international disability NGO Light for the World launched its ‘Sports for Peace’ programme in the Internally Displaced People (IDP) camp in Mahad, near Juba.

With almost 8,000 residents from different tribes, rivalry and violence broke out on a regular basis. 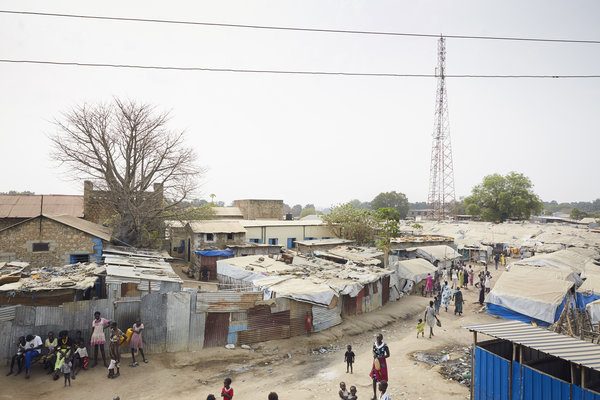 The Internally Displaced People (IDP) camp in Mahad, near Juba.
Photo: Julia Gunther/Light for the World

To unite the kids of the camp and to set an example for the whole community, Light for the World encouraged them to take part in its youth club ‘Sports for Peace’ with a football and volleyball team as well as several indoor sports for people with and without disabilities.

The football team proved so popular that several of its players have been selected for South Sudan’s national team.

The programme creates a community spirit to help others in the camp too. For example, the sports teams often help people with disabilities to build their shelters or they patrol the neighbourhood to make sure crime is kept to a minimum.

One of the football players, Peter Geu is 22 years old and has spent almost all his life in the IDP camp in Mahad (from the age of 4). He is part of the Dinka tribe and joined the team in 2014 when it was launched.

The project is very important to Peter because he believes it helps keep the peace among the tribes. In 2015, he was discovered by the South Sudan national league and now also plays matches in Ethiopia and Uganda.

Sport has a unique power to attract, mobilize and inspire people, but it wasn’t an easy task for the Light for the World team.

“It took us about a year to establish what we have achieved now. It was difficult at the start given the rivalries of the different tribes but the kids eventually got to know and like each other,” said Jiji Stephen.

“It’s amazing to see how far we have come. Violence was omnipresent in the camp and it wasn’t an easy feat to create what we have now. I’m proud that we managed to launch something that special that other NGOs want to replicate our concept in other camps around the world.”