Birmingham’s John Taylor Hospice is calling on former staff and visitors to share their memories of the hospice for a new history archive. 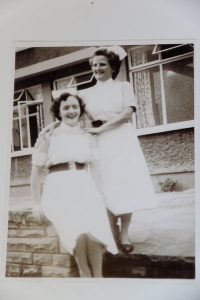 John Taylor has been supporting families in the city since 1910 and is keen to collect people’s recollections of working and visiting the hospice over the past decades.

In a newly launched history section of its website the hospice now features films of two women who worked at John Taylor in the past sharing their memories.

Pat Murr, aged 90, of Sutton Coldfield and 79-year-old Pat Seickell of Lichfield were nurses at what was then known as the Taylor Memorial Home.

Pat Murr, who was a staff nurse at the hospice in the 1950s, said: “In those days it was just nursing to make people as comfortable as we could. Visiting was very limited in those days and nobody ever talked about the hospice.”

Pat Seickell, who was a night sister in the 1970s and helped launch the community service in the 1980s, said: “When I joined the hospice in 1975 it was different from how it is now. It was fairly basic with nursing staff, a cook and some cleaners and that was about it.

“My remembrances of the place was that, although it was a place where people came at end of life, on the whole it was a very happy place. I do keep up to date with the hospice and I think the ethos is very much the same – living until you die.”

Founded in Sparkbrook in 1910, John Taylor moved to its current site at The Grange in Grange Road, Erdington, in 1948 as part of the formation of the NHS. In 2011 the hospice left the NHS to become independent. Initially this was as a community enterprise company but this April the hospice has become a charity.

“To celebrate our special status as the longest-standing hospice in the region we want to ensure we are capturing stories from our past,” said Penny Venables, CEO of John Taylor Hospice. “We would love to hear from anyone who has worked here, visited or had other links which they would like to share – and we are particularly keen to collect memories as far back as possible.”

If you would like to share your stories of John Taylor Hospice please email your memories to enquiries@johntaylorhospice.org.uk